I didn't mean this to happen it just did.  I was surfing again and came across a crazy quilt inspired by the TAST 2012 challenge by Debra Spincic.

a Crazy Quilt sewn during 2012 and finished January 2013
It consists of 12 blocks that correspond to the 12 colors of the Color Wheel
Embroidery was inspired by the TAST challenge of 2012
Embellishments were from a personal collection gathered during years of sewing.

This is the complete quilt.  She has close up's and explainations for each block on her blog. 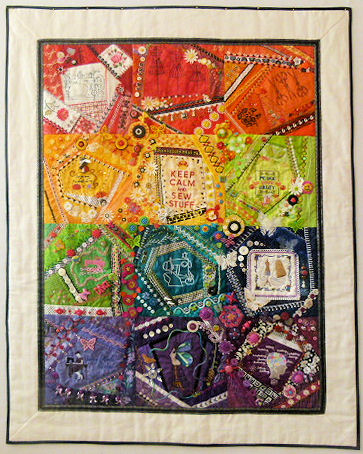 I haven't been taking part in the 2013 challenge since Mother's Day, when I first became ill again.  I have been wondering how I could join in once more and this type of thing would be perfect.  I have the embroidery module that attaches to my Bernina 440 machine and have never used it.  Maybe I could learn and add the hand embroidery?

As I am laid low with an ear infection I have had to dig into some of my past stitching.

After TAST 2010 I designed a book cover, for a class, using many of the stitches from that challenge.  To help demonstrate how you could give a stitch it's own personality I developed an exercise for the back cover and used Knotted Loop Stitch as one of the stitches.  I found that many students had difficulty learning this stitch.  It may  have been that I wasn't clear enough in my explanations but I have taught it 4 times now and it still seems to be difficult for some students.

I find that it is one of those stitches that compliments others.  It looks a lot better in a group of stitches, although it holds it's own here.. 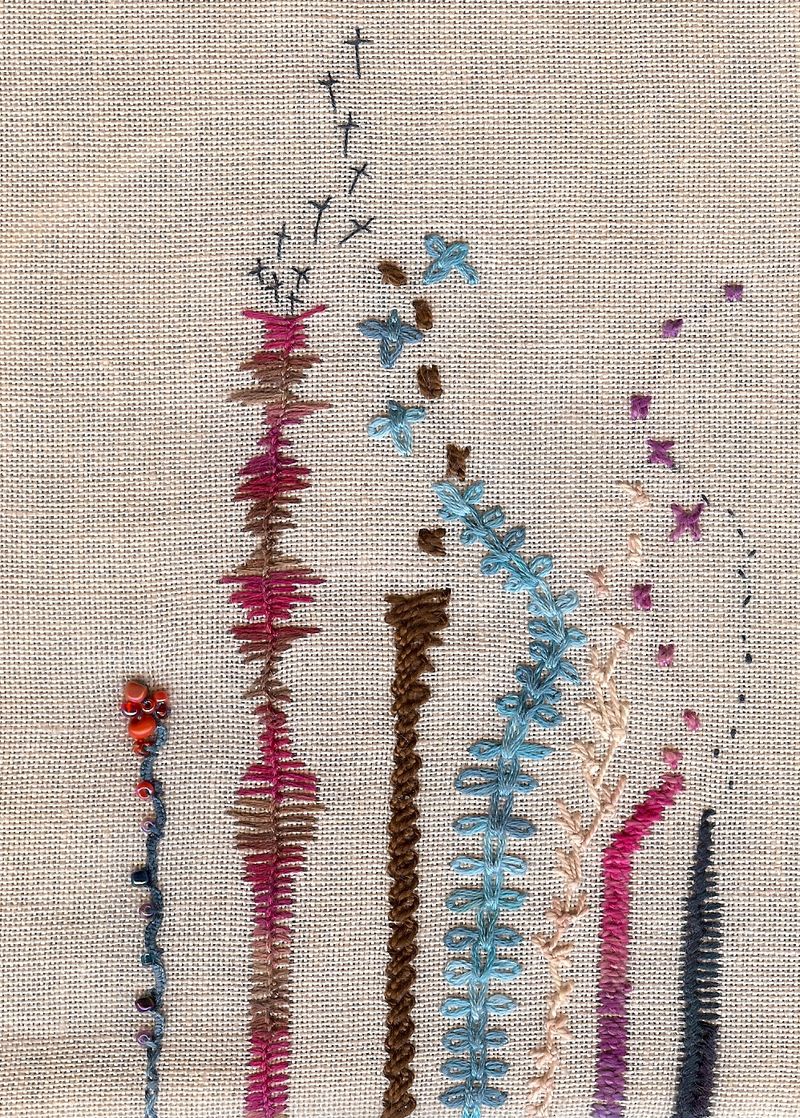 I use this stitch quite a bit in creative embroidery.  It makes great stems for plants and other botanical type embroideries.

At the moment I am in an owl period so of course I had to do an owl.  I found the stitch got more difficult to control the larger the loop became and I needed to add some more loops to make it look more like feathers.  All in all I like this owl.  He has attitude. 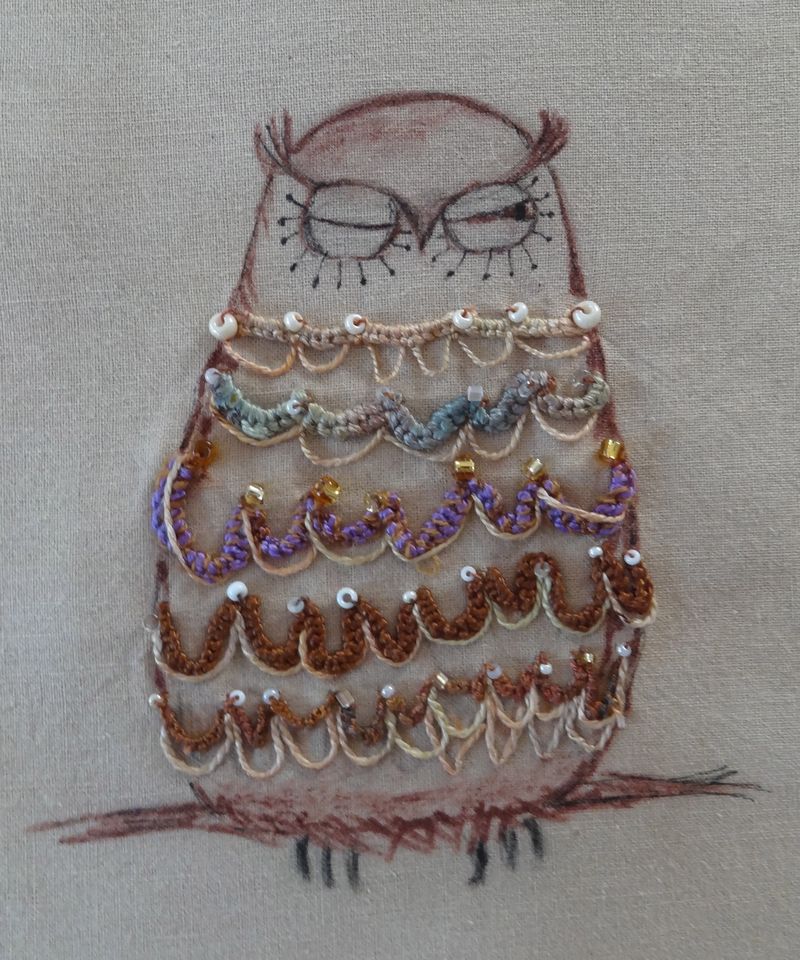 I love this stitch.  I have been using it for a while now and the more I use it the more I like it.  Because I use it so much I decided to try it in ribbon, something I haven't done before.  I like it even more.

It is spring here and everywhere I go the trees and plants are exploding with colours.  The noise of the birds is deafening at times and being that time of year I had to stitch flowers.  My senses have been overwhelmed over the past week or so with the beautiful gardens in Toowoomba.  I wanted to stitch some blossom like these. 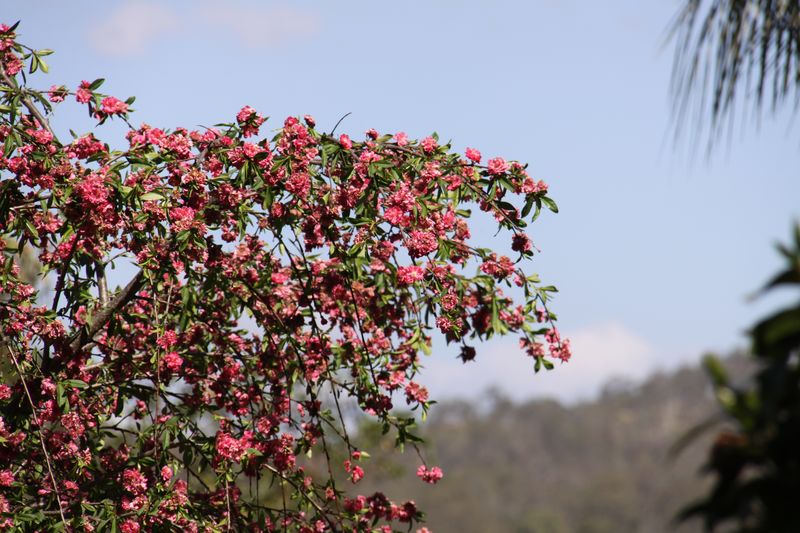 But all those other colours crowded in.  So my blossom branches have a mix of all the colours I have seen in the last week.  I don't actually think I saw something like this it is just what happens when the senses get overloaded. 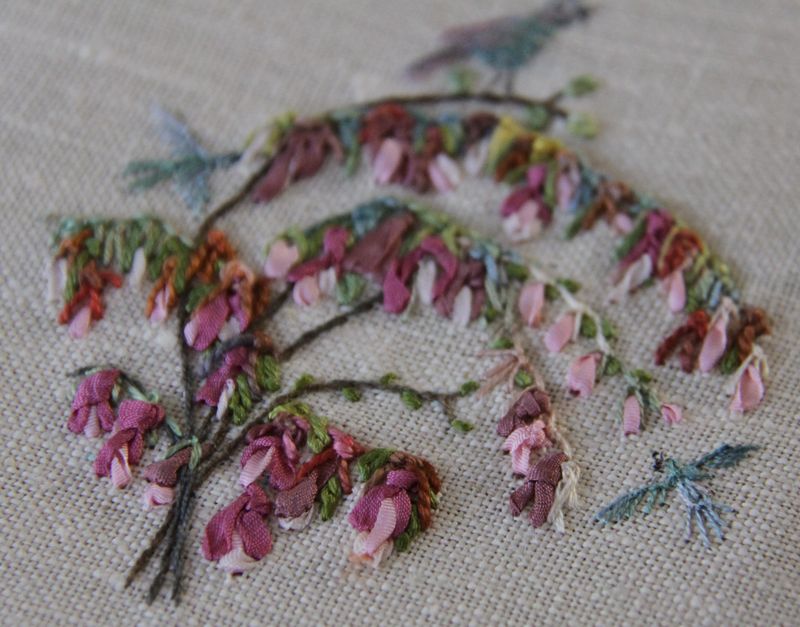 This stitch has been wrongly named.  I should have been named GRIZZLE stitch.  That is what I did every time I had to re-thread that needle.  All my friends who had to listen to me grizzle agree.

I did quite a few experiments with various thicknesses of threads and found that the shiny threads gave the best results.  The finished thread twisted without effort. 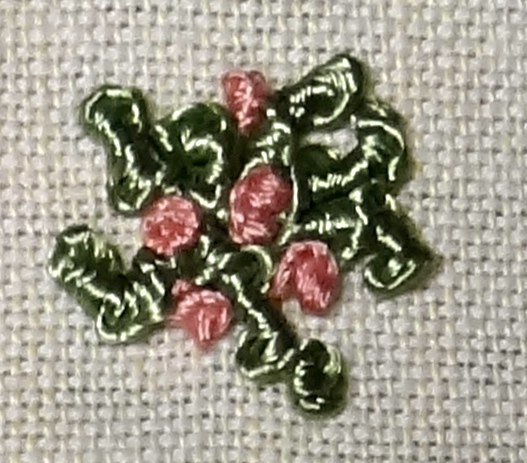 Pulling the thread tighter made it stand stiff.  I thought at one stage I would do a relief sign but could only find one letter bead so canned that idea.  But still, I think that idea would work well.  I might have to revisit that.

I liked the idea of adding beads so incorporated them into the design of my silly bird.  This bird is definitely male.  Only males of the aves species would have this kind of plumage. 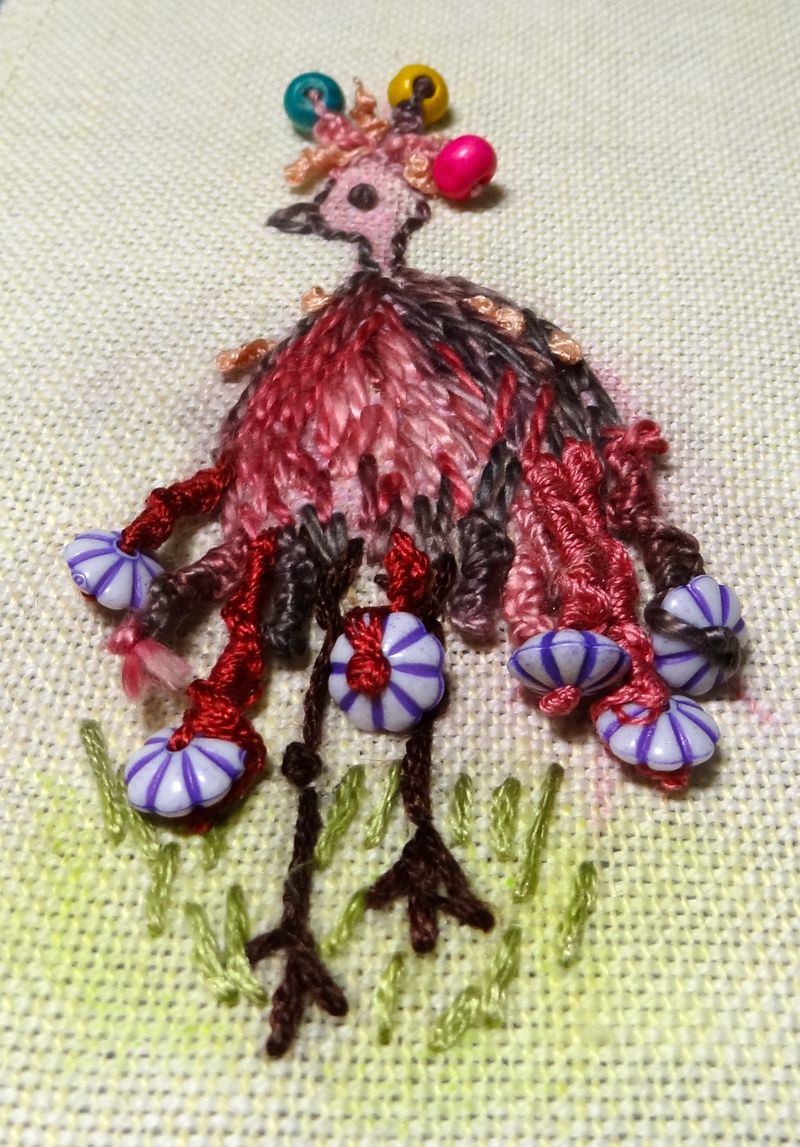 Don't be deceived by the head piece this is all part of the look.  Maybe it is an exotic bird from the South American jungles? 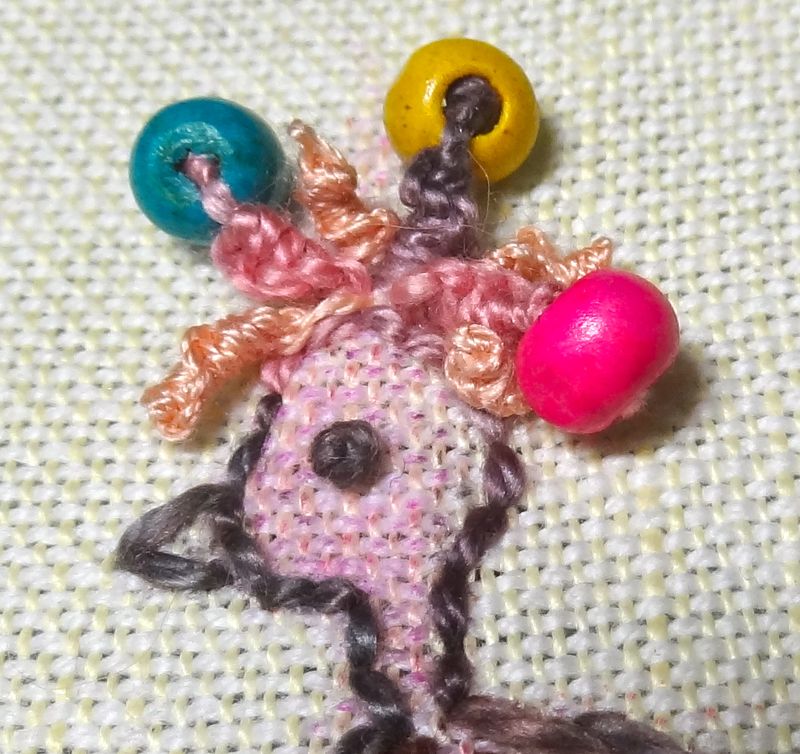 The God's are smiling on me this week.  I had a catch up week and now a stitch I have recently incorporated into a design and have the sample all stitched up.  This at a time when I am up to my eyes in classes, book reviews and a ton of other work.  They really don't want me to fall behind.

I learnt Pistil Stitch back in the days when I was into silk ribbon embroidery.  Then I used it in Candlewicking, it was wonderful for doing stamens on flowers.

Recently I designed this embroidery for a pocket on a child's tote bag and it was just perfect for those tail feathers. The felt bodies are held in position by the embroidery stitching and this lets them sit proud on the background.

I have published this design under creative commons copyright. 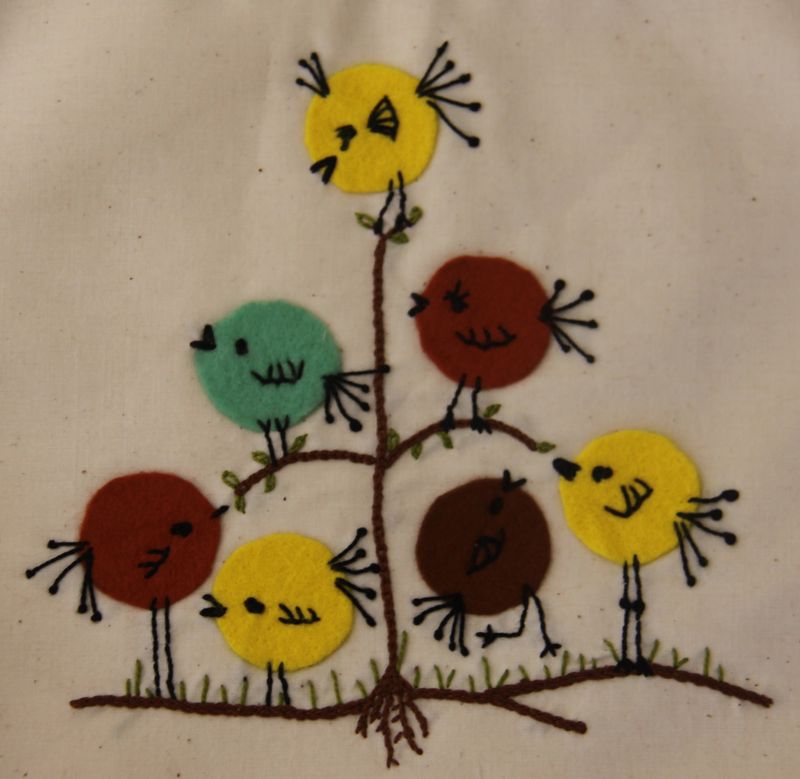 I'm glad we had a rest week or I would never have got this weeks piece done.  I took my inspiration from  Colbert Embroidery.  There is a free copy of the DMC book by Dillmont on the antique pattern library site. (It is in French.) This is one of the few books available about this style of embroidery.  I haven't seen sheaf stitch used before but it does work the same way as the other stitches included. 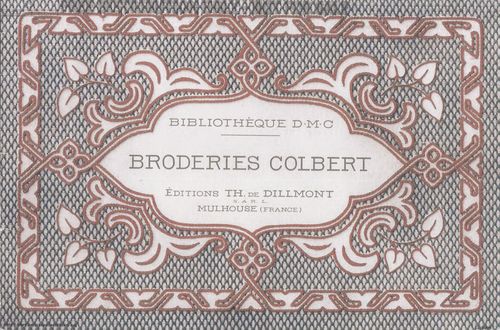 The difference is in the thread used.  I have used Danish Flower Thread and this stitch eats thread, I used 20 metres in this small piece.  Perle 3 and 5 are the traditional threads used.  The piece was stitched on 30 count even weave linen, which suits the thread but does make for a lot of stitching. 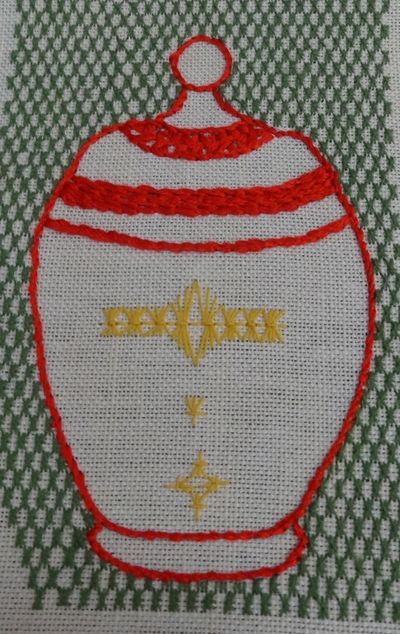 I have included the Italian version of the stitch in the yellow band and the Guatemalan in the two lower designs.  One thing I noticed that in this thinner thread you would be able to stitch some optical illusions by varying the distances.  It is something I might explore in the future.

This isn't a hard stitch, in fact it is an easy stitch to pick up.  I have never used it before so I had no preconceptions about it.  But, the moment I saw it I knew it was something I had been looking for.

Why?  Well I bought a set of woodcut cards in London back in the 1970's.  They were of people who plyed their trades on the streets of London back in the early 1800's. They are the size of playing cards but printed on the back it says that they were originally published in a series of chapbooks, "Pictures of Real Life For Children."

I have always liked them but just didn't know how to use them.  Then I saw this stitch and it is perfect for stitching over the woodcut print.  It isn't regular the way I stitch it but that first stitch makes a great edge and the following line is so broken it is just like a woodcut print.

The caption on this print reads;

Man with his Dancing Bear. This curious sight is frequently seen about the streets of this great city, and is far from being the most contemptible. 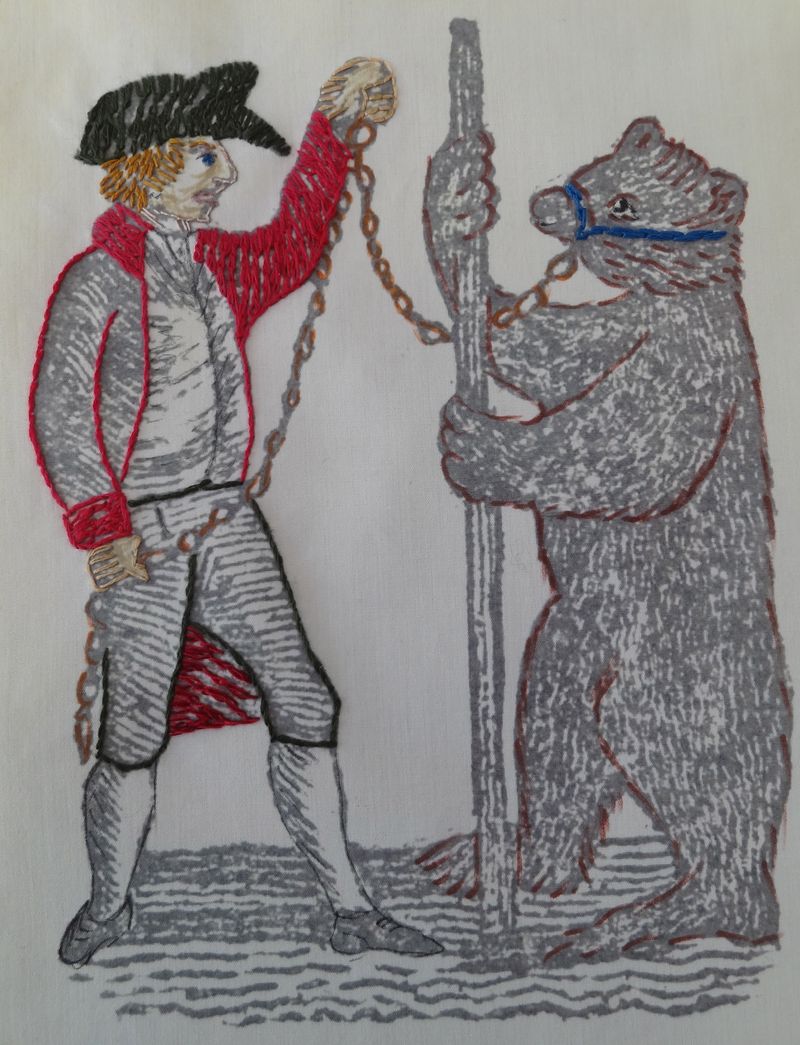 This is my first audition of the stitch in the coat and hat of the bear handler. 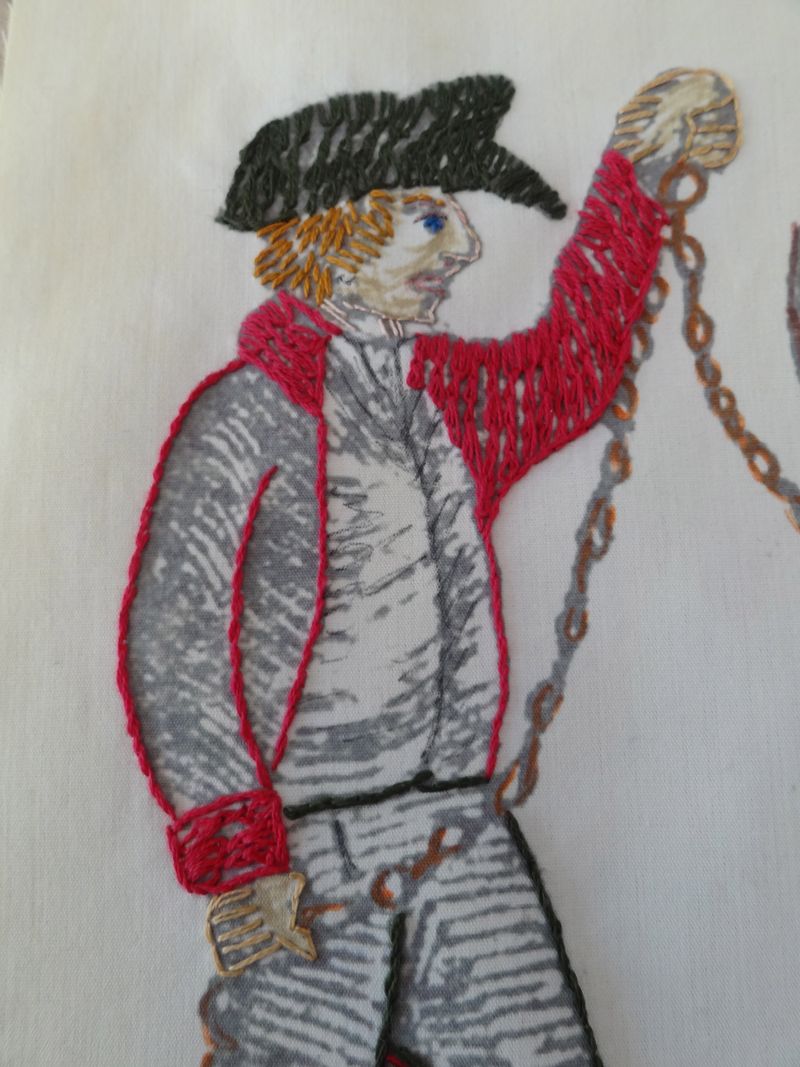 The V & A has a big collection of chapbooks and just as an aside there is a wonderful Facebook page of "Shakespeare and Company Bookshop"  it is just like one of those great old bookshops I bought these cards from.

This week has been a struggle to get my piece done.  I have had the flu and after having to spend 2 full days in bed I was left with a very fuzzy head.  On top of this I had to help main the stand at the Ekka, another day gone.

When I actually got to the stitching I just couldn't get going.  I tried the stitch in all kinds of threads. 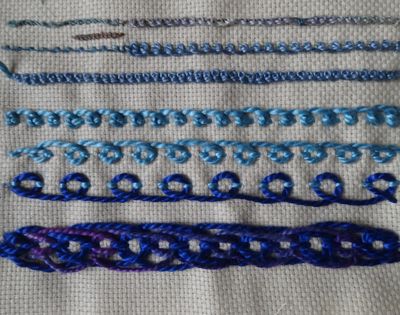 Then thought that it might make a nice trim on a clutch bag I am going to make to match an evening jacket. It looked quite good and I think I will use it for the flap on the bag.  But I am not going to iron it.  The fabric melts being a synthetic. 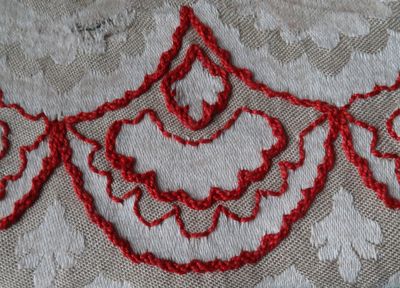 Next I thought I might try a bit of felt and experiment with using machine stitching in place of back stitch.  This I did with two of the outside rows.  Not a bad result and I think it warrants further experimentation.  The wavy row between these two was worked over a running stitch, again not bad.

But what to put between the bands.  As Pekinese Stitch is normally worked over a back stitch I drew a design, based an a piece of lace, and worked this in back stitch.  Then worked the flower sections in another colour adjusting the size of the loops as I went.  I am very pleased with the effect. 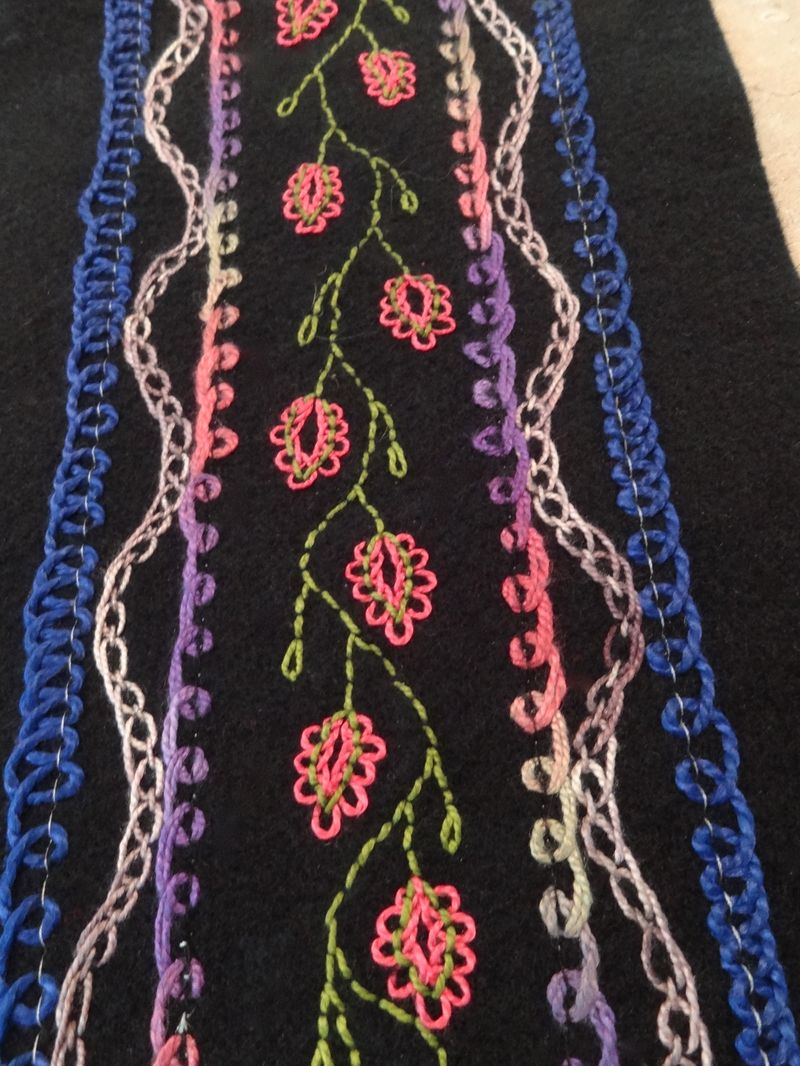 How fortuitous.  I have been working on samples for my children's classes on just this stitch.  We have a number of 10 year old Cast on Stitch Queens in our group and I wanted to show them some ways to use the stitch with woollen thread.

If I get time I will try and work some samples in other threads but for this week it is wool. 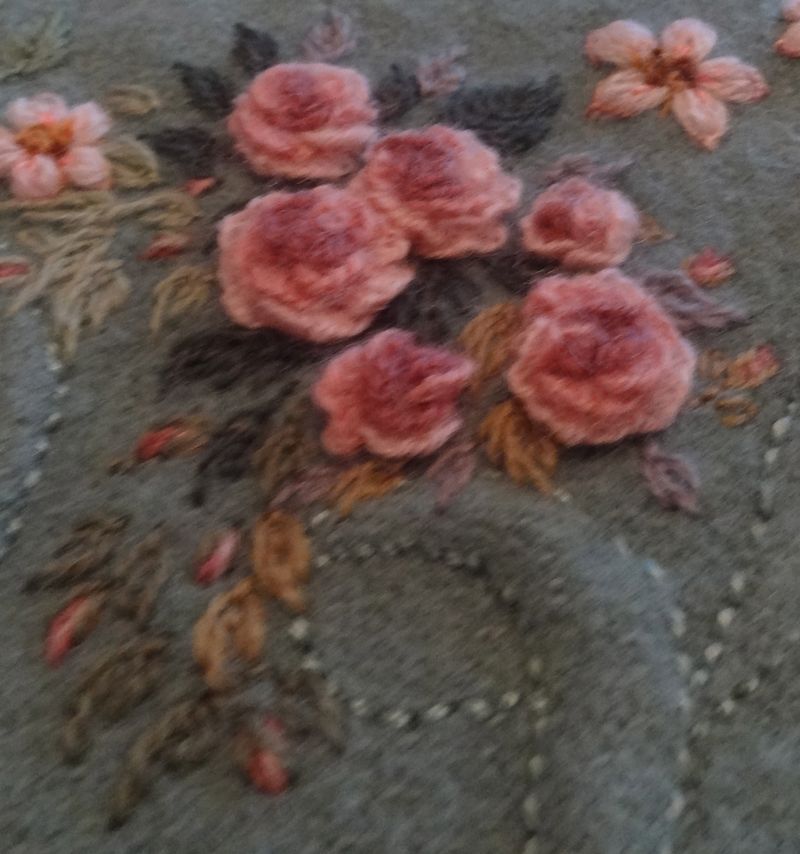