Some action on the directions

I have been meaning to join a Quilt Group closer to home every since I moved to the island, now I have done it.  I am now a member of "Star of the Sea Quilters."

I am still going to keep going to my other group but it is inevitable that the day will come when I am unable to travel that long distance.  My Neighbour Margaret moved from Victoria to the island and she goes to this group along with another friend, Bev, who has moved to a new home on the mainland nearby.  So, I will not be walking in 'cold' so to speak.  Thank goodness as I would hate to just walk in and say "here I am, I want to join."  Yet that is what I did in the past.  As a teenager I walked into the NSW Embroiderers Guild in Sydney and in my early 20's into the Embroiderers Guild in London and said just that!  Oh the cheek of youth.

Bev is having an exhibition of her work at the School House Gallery, which Margaret is opening, next week which will run for a month.  I'm looking forward to seeing that. 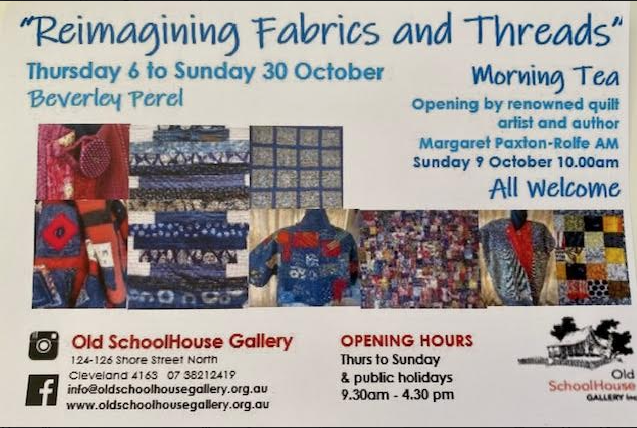 (Bev used to own the Melanie Magic Patchwork shop and has a serious collection of Japanese fabrics.)  Now that I had got through the formalities of the first meeting next comes the settling in stage.  Although the group meets every week I intend to only go twice a month.  This move is about reducing stress not increasing it.

I am sure there will be many happy hours spent with the new group - Japanese fabric, using fabric and thread in new ways among stars of the sea quilters. You have much in common. Enjoy!

I'm sure you will enjoy it enormously!