The weather has returned to being terrible again and the reports say we are going to have rain and high winds for the next two weeks.

The ground is sodden and when the high winds hit we had a huge tree come down out the front of the house next door. 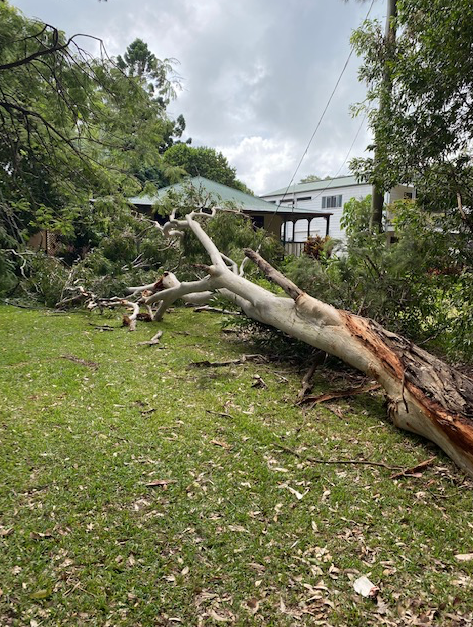 Wham, Bang and there went to power to the whole island.  It would happen on a public holiday and they had to get a crew and all their equipment over from the mainland.  So, it was a major to do.

This tree broke off about 4 metres above the ground and as you can see it is a big tree. 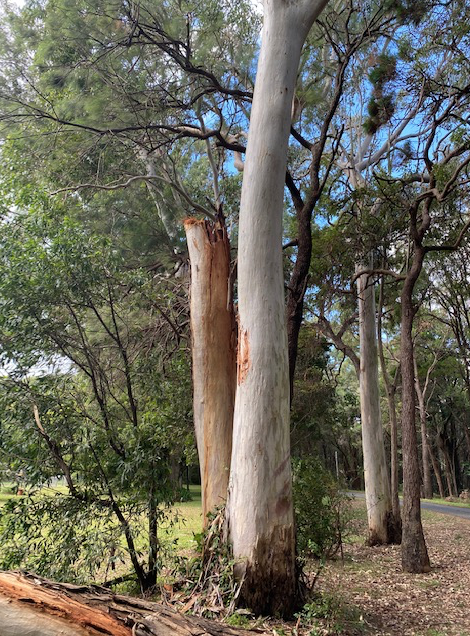 Luckily it just missed the house next door but the front garden is cactus.  You couldn't see that there was a fault in the tree up this high and the wind was gusting well over 100K an hour.  Luckily it missed the power poles or it would have taken even longer to repair. 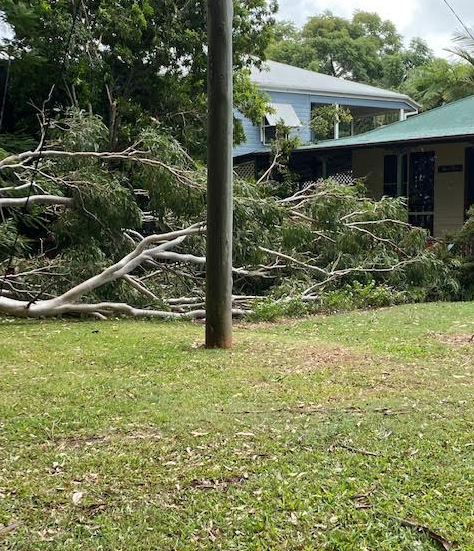 The house next door is a holiday home and the lady that owns it is in her 90's. They were not there this week, which was a good thing because the noise of the tree breaking and falling gave me a start, not to mention everyone else who lives nearby.  There was great rushing around to check that everyone was OK and accounted for.  When I checked on the verandahs I found all these snake skins that had fallen from the trees,  I am going to look up when I go under them in future.

When the repair crews arrived from the main land the first thing they did was set up their lights.  They knew it would take some time to run new lines and connect them.  Everyone laughs at me and my 'cyclone cupboard'.

Well this time I had all the candles and standby gas for the BBQ ready and on hand, along with torches, batteries for the radio and I knew to rush around and get dinner ready before the sun set.

There were lots of candle lite dinners on the island that night. 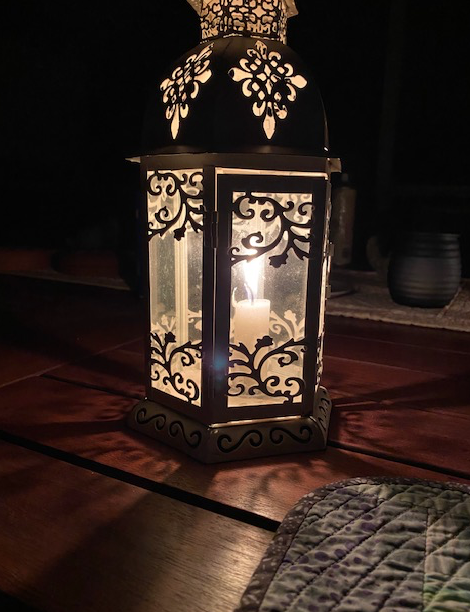 It look 24 hours till we were connected again.

The crochet continues, we are now onto week 2, I was a bit late starting. 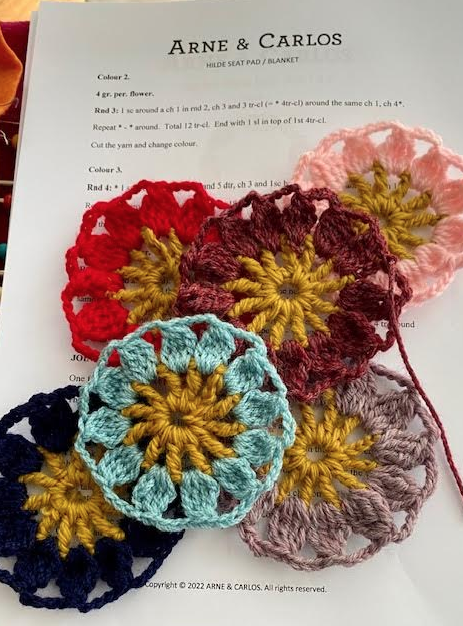 I am finding lots of odd balls of wool around the house now that I am looking for them. 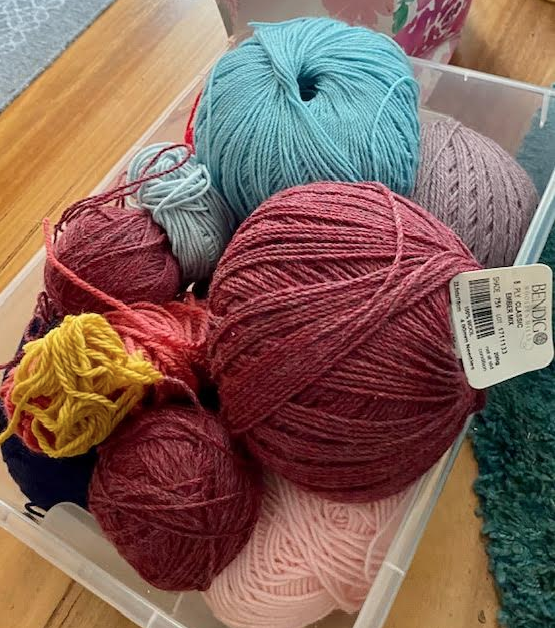 A bit of Kogin.  Because of 'habit' I always write an evaluation of each class I teach with the aim of improving it.  I think I have another project here. 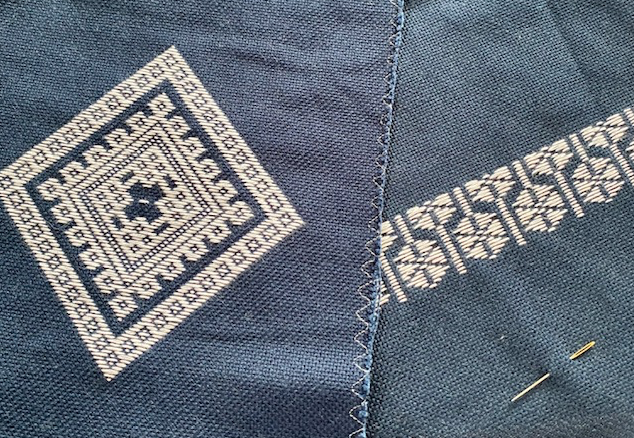 Knit and Crochet along

I have such a stash of woollen yarn that when I saw the Knit and Crochet along the Arne and Carlos were hosting I decided to join in. 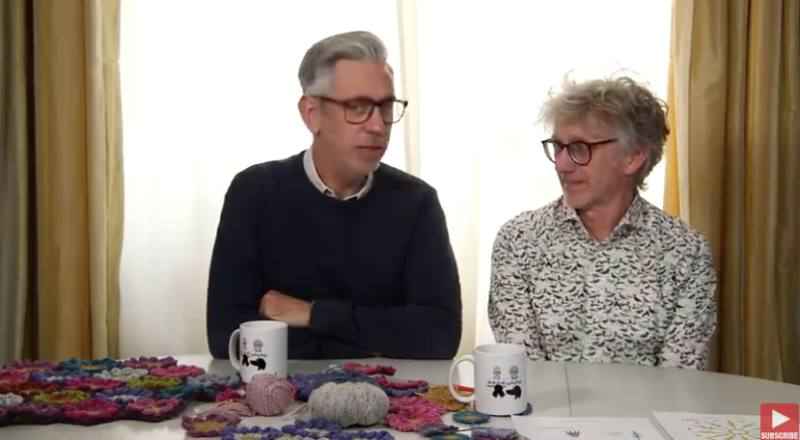 Of course in all that stack of wool that I have in the cupboard I didn't have one ball of yellow, which I need for the centre of the flowers!  That is just "Murphy's Law", so I had to buy a ball of wool, just one, but if I like this I may have to buy another. 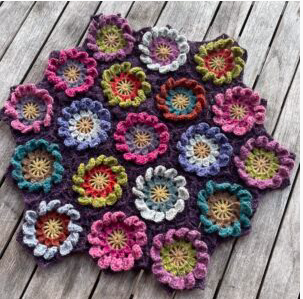 There are supposed to be 270 flowers in the throw, mine is going to be as many as I can make out of the one ball of wool which at the moment only stands at 70.  I will have to buy another ball of wool. 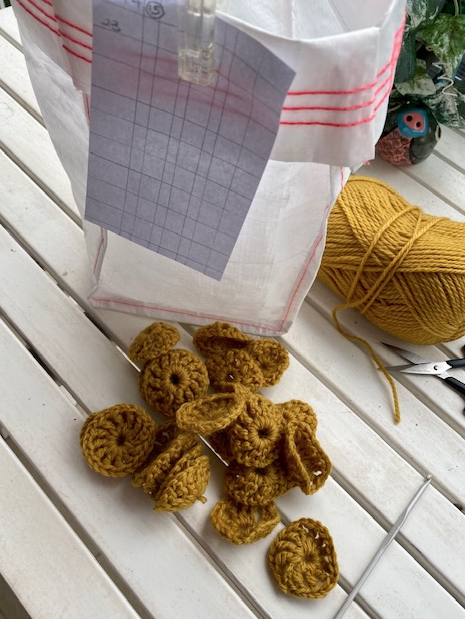 And my wool will not match those used by Arne.  They are using Rowan, which costs a fortune here.  No, mine is going to be what is in the stash, mainly wool from Bendigo woollen mills. 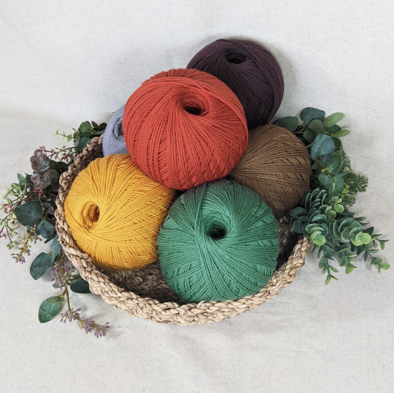 Crocheting the centres is kind of mindless, so I am doing 10 at a time and keeping a record of the total on the outside of the bag.  The other reason I am doing this is because all my flower throws have disappeared.  How can something so big just vanish?  I think if I look in the homes of my children I might find them.

I noticed that that knit-along bit is a continuation of blocks they started a few years ago.   There are 28 in the file of past blocks.  I will collect the patterns and keep them for next year I think. 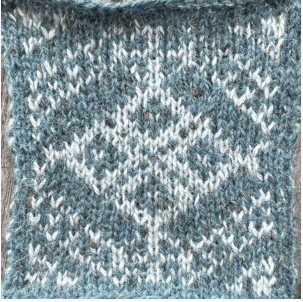 Good to know other people have UFO's.

Up before dawn to attend the ANZAC service.

This year with a war in Europe I think of all those men who are fighting.  I also remember my father who fought in WW2.  He died at 55 years of age.  The war had taken his health and his peace of mind.   Once again history is repeating itself.

This week does not rank very highly in my ratings.  Things are just not going my way at the moment.  Maybe I am being tested to see how resilient I am?

I am still having trouble with my health.  I have a growth on my thyroid gland that is driving me up the wall.  The doctor recommended all these scans etc but do you think I can make an appointment?  Not on your life.  The problem is that most of these scans need specialist equipment and the surgeries that have them got flooded, in fact two of them got flooded.  There is another one on the Gold Coast but I have to wait a month for an appointment.  I also have to get an ultrasound done and there is more than 2 weeks wait on that because so many people are away sick or are a close Covid contact.  Frustrating!!!

Next is my husband.  The less said about that the better.  He is a man so that explains quite a bit.

And the third thing is that my work was rejected.  All that time and effort I put into knitting a cardigan for my grand daughter only for her to put it on and say, "I can't wear this it prickles too much".  I used a yarn which was bamboo and wool so it wouldn't prickle.  I thought I would try her sister.  Same response.

So this very nice cardigan that took ages to knit, not to mention the cost of the yarn has gone to Vinnies. 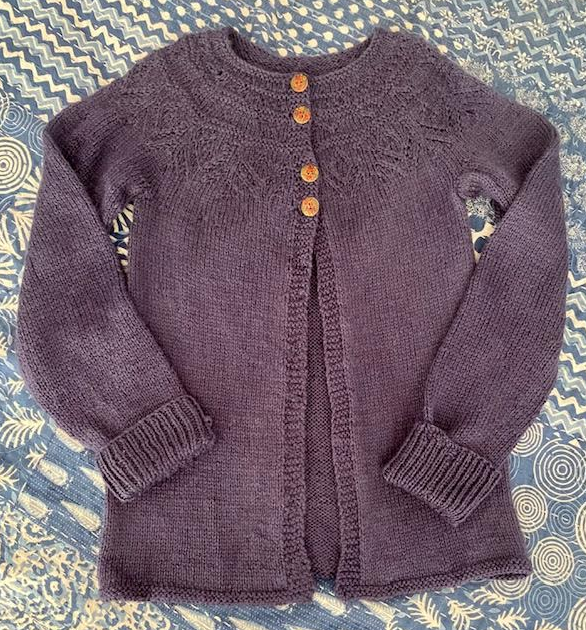 I hope the heavens have someone who they have earmarked it for?

Why am I starting a new book?  Well, as a Vera and Shetland fan I do love Anne Cleeves writting  but this book has got mixed reviews.  Some love it some hate it.  I have to say it is a bit slow at the start but it has now got to the "can't put it down" stage. 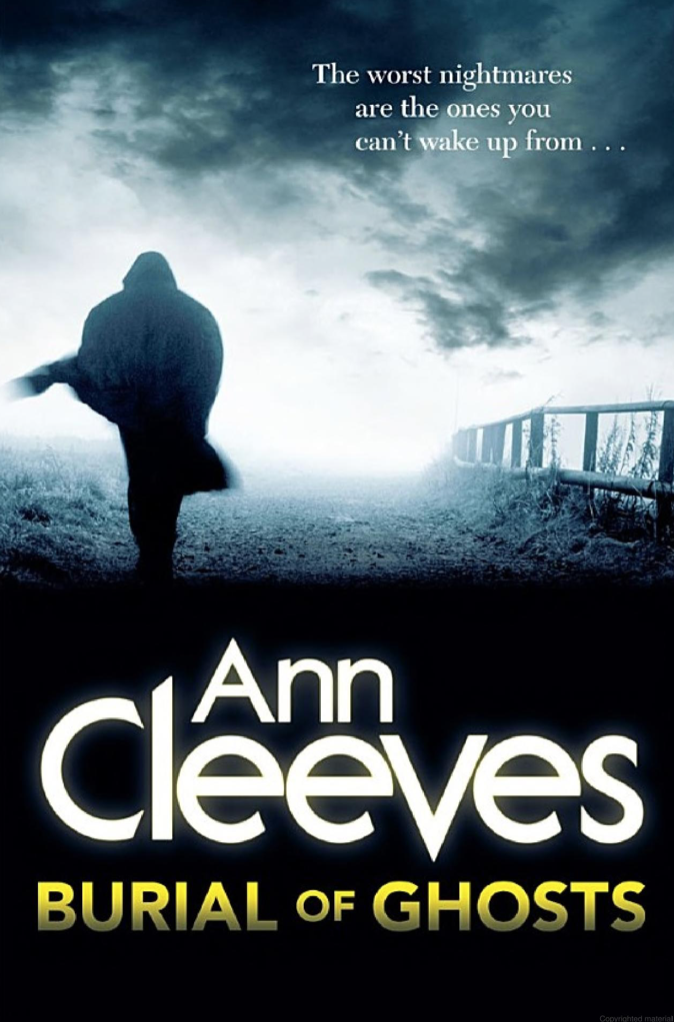 She wrote it some time ago so maybe others didn't like it.  I'm sure there will be lots of twists and turns to the tail.

Not much to report, just a bit of knitting. I am still ploughing through the cleaning up after all the Easter visitors.  Sixteen extras, plus 3 extra dogs, keeps you on your toes and kids just can't help making a mess.  They managed to bring heaps of sand into the house and someone dropped something on my polished wooden floors that I just can't repair.  Looks like I will have to buy a rug to cover it.   It is the washing that seemed endless.  Everytime they went to the beach they took a fresh beach towel and then a new bath towel when they had a shower.

It was days of endless cooking.  My son cooked the breakfasts but there were morning and afternoon teas lunches and dinners that just kept going on.  And then there were the blow-ins who didn't stay just visited.  The cafe was closed and no one thought to check this would happen, so Mum just kept cooking.

Oh, and a lot of birds thought they might get a feed here as well. 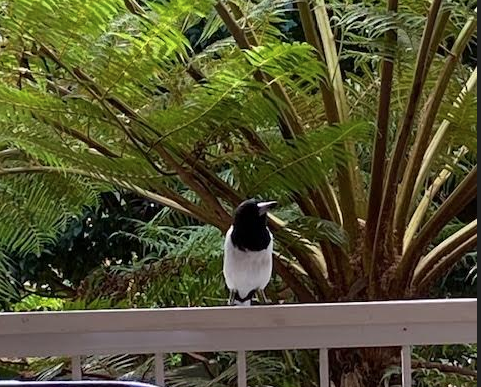 Still this is what memories are made of and those children will take them through life with them.

Visit to the Art Gallery

There isn't that much time before the 10th Asia Pacific Triennial of Contemporary Art at the gallery closes.  What with Covid shut downs and the floods  it has been impossible get there.  So I made the time yesterday.  I didn't get to see everything and there were so many children on school holidays there that I am now in overload.  I took quite a few pictures and I would like to go back, but I don't think that will happen.

Parking was a problem because they still haven't restored the car-parks after the flood  and all the fountains and water features are still cactus. 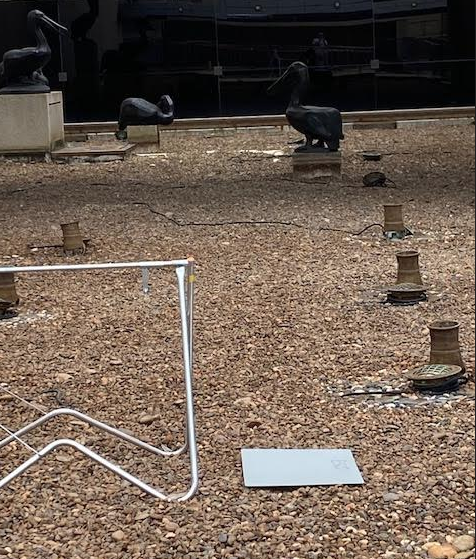 But the water dragons are still going strong and are as cheeky as ever. I saw so many interesting thing that I am going to have to 'digest' the information overload. So I will go with what was the stand out exhibits for me.

These wonderful pots would have been hanging over water, but the floods have put paid to that, so, you have to imagine them all being reflected in imaginary water, they are still pretty spectacular. The other stand out for me were the pieces by Mayur and Tushar Vayeda from India.   They belong to the indigenous Warli people of the village of Ganjad, in the Palghar district of Maharashtra, India.  I have been to some of these villages and the women paint the walls with the most wonderful designs.  These painting take that work to another level. 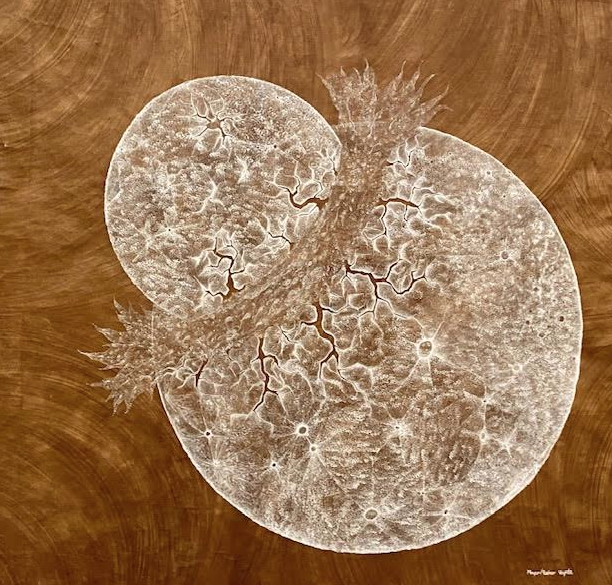 And there are so many shapes that would translate into embroidery.  This one of the village. This looks like fairies or spirits flying in the air. 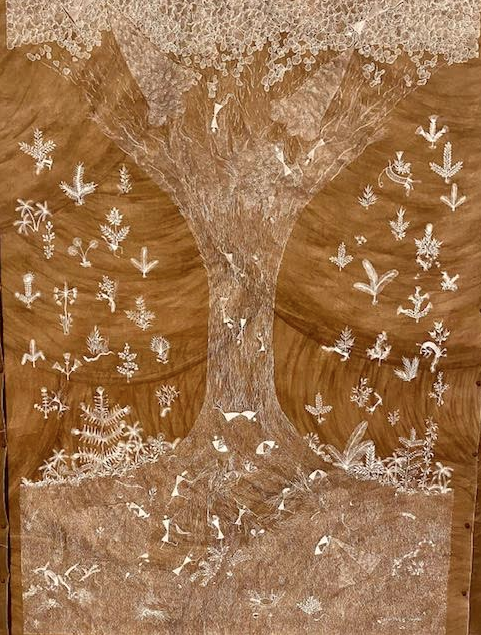 And the wonderful botanical shapes in this piece. 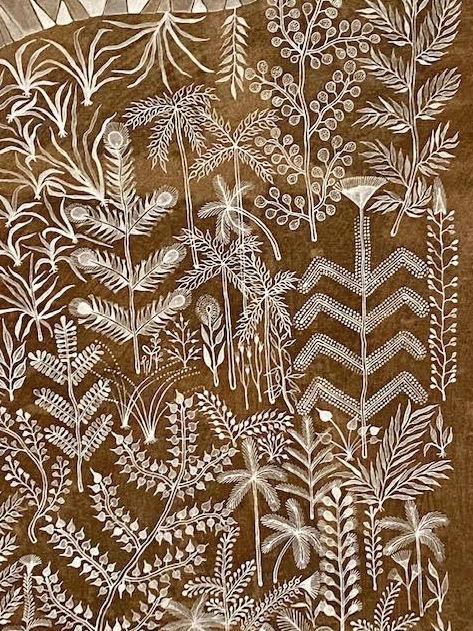 This is a bit gross, but I know that the swirling backgrounds would have been painted with cow dung.  But, you have to admit it gives a great colour.  I'm not sure how I could replicate that in embroidery!!

I have got carried away with the Arne & Carlos videos and am knitting Easter Eggs with my scrap wool. 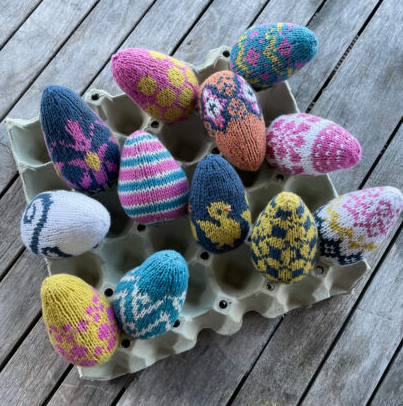 Arne knits the European technique which is beyond me but Carlos knits the English method, thank goodness.  I  would never have thought about knitted Easter eggs until I saw this video.

I am also having to do my own housework as my cleaner has Covid, that is so time consuming.

After looking at the Norwegian traditions I got to thinking about the time I spent in Austria back in the 1970's.  I spent some time in the Tyrol and remember being really surprised to see every day people wearing folk costumes as part of their normal dress.  Women would be out doing the shopping dressed this way and many men also.

There was a parade of brass bands I saw at this time.  All the musicians  ( was studying music back then) were male  and some of them were dressed in what looked like old and rather "tattie" traditional clothes. I went to You tube to see if this tradition was still upheld and sure enough it is and a lot more bands and people matching today and now there are women in the bands.  Now the costumes look so expensive and all are beautifully cared for.

That has got to be a good thing.