Doesn't time fly?  Eighteen years ago I had a lump removed from my breast.  It was only early stages and after it's removal I had some ray treatment and I have been free of the disease since then.  At the same time as I was worried sick about what might happen my husband was preparing for the world master's games as a competitor in rowing.  To cut a long story short, I went with him for the competition, all bandaged up and waiting for the pathology results to come through.

We drove down to Ballarat in Victoria from Queensland taking the inland route through the dry interior.  It was so cold after Queensland's heat.  It was cold because the morning temperatures were below 0 degrees celcius!  The ice had to be removed from the car's windscreen and then we sat at the edge of the lake and watched old men (and women), well most were over 45, compete.  My husband came home with a swag of medals which he promptly put in the bottom draw. (He is on the left.) 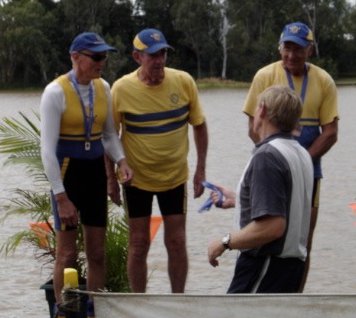 But in the mean time I was bored out of my wits!  You can see in this shot he was chuffed and I was cold! 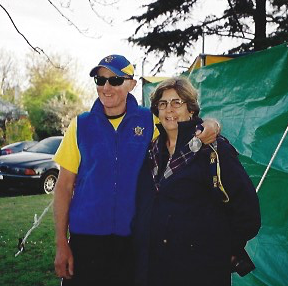 After the first day I set out to explore the shops, embroidery and patchwork mainly.  By the next day I had a car  full of other competitors wives who were also bored witless.  We found some really pretty towns in the area which were all founded during the gold rushes of the 1850's.  (These shots are pre-digital cameras.  I can't remember when that was.) 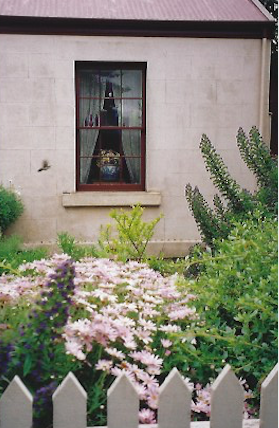 And I remember that I was going to restitch this sampler from the 1840's.  Didn't do that either. (Love the lavender behind the frame.) 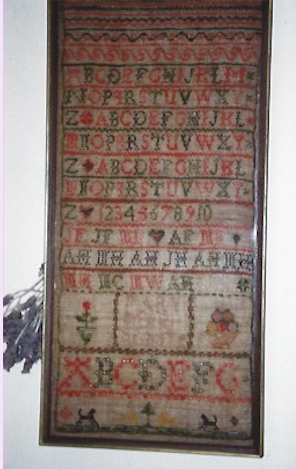 I found some great shops and bought up lots of supplies.  At one shop I bought the prettiest patchwork fabric that was cut into squares.  (This was prior to precuts.)  I brought it home and looked at it, and petted it, but could never work out what I would do with it.  Fast forward 18 years.  I pulled it out the other day and have sewn all those square into rows.  It was the designs on the fabrics I liked so why cut it up?

I don't know if this is wise, but, I have decided to embroider all the seams.  It would be too difficult to lug it around if I sewed all the fabric together so I have just started with rows.  The embroidery is going to be in shades of blue in all different weights and I am starting with Wheat stitch.  This is not going to be a fast job so it will go into the WIPW catagory.  (Pulling that bundle out of the draw hasn't made any more space.  Oh well.)

They are beautiful prints and brought back lots of memories. 18 years ago, and you still remember the weather!

It was so cold.

Good to see you having fun with those fabrics at last!