I am back on the hospital round - about again.  Firstly my husband and then I had to have lots of tests, again, with still more to come.

You should see the weird looks I get as I sit and embroider!  But sometimes these waiting rooms are not well lite and I turn to my books I keep on my Ipad.  This time I got to finish the 6 book series "Death of Kings" by Bernard Cornwell.  Not deep reading and a bit "boy's own action" but still enjoyable to pick up and put down. 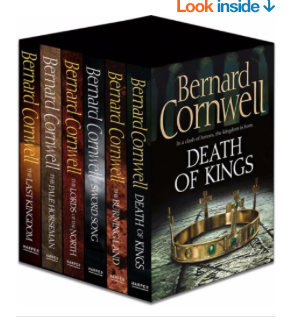 These are all set in the time of Alfred the Great and the wars between the invading Danes and the Saxons.  They keep pretty much to historical fact with a far dob of fantasy to make the story interesting.  But now that I am finished I can see that these events also had an effect on George Martin and his "Game of Thrones" series.  The times,  the events, the kingdoms, all seem to hang on that same framework as the times of Alfred the Great.   (Even the sighting of dragons flying over Northumbria. AD 793)   Once you get back to these times there isn't a lot of written evidence. The "Anglo-Saxon Chronicles" seem to be the source that most writers refer to.  It was an official record written by the church so is pretty heavy on bias.  Still, a good read.

The advantage of the AngloSaxon Chronicles is that at least we know what the bias was, which makes it easier to giver reasonable weight (or not) to what they say about any particular incident or person...

I agree about waiting room lighting, by the way. It's one of the reasons I now travel with crochet!

I dont think there is anyway to get away from bias, just look at some of news highlights we see today.  I suppose I want a utopian world were everyone is honest and unbiased.  That is like searching for the Holy Grail.