What do I need to pack?

It is summer and it is hot and sticky.  The beach is there to enjoy and the coffee shops are packed. 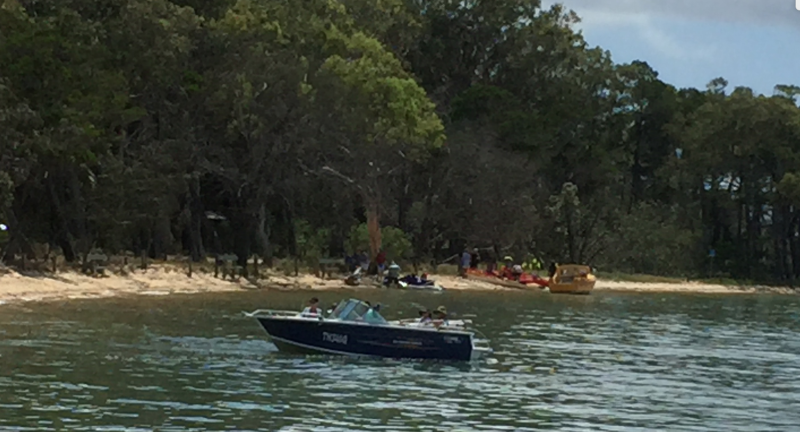 We are swapping houses with our son, who has invited 2 other families to come and share the week with him and his family.  I have cleaned the house, put new sheets on all the beds, put out fresh towels for everyone, even cleaned out the fridge.  But just what do I need to take for a week back in suburbia?  Decisions, decisions.

Months and months of being unable to do anything and suddenly I can knit.  So I am starting with some simple things, rabbits. 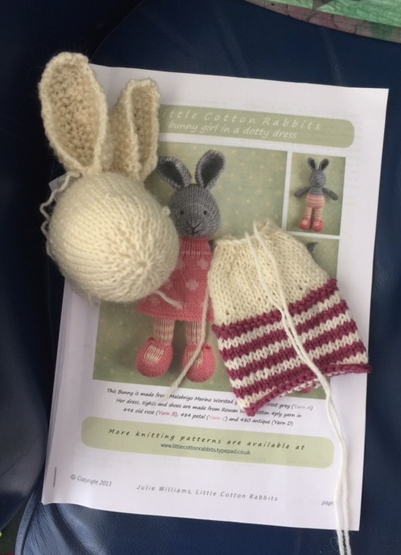 Just using left over wools and doing a small amount each day.

I bought this book as a present for someone else but had to read it first, just to make sure it was suitable.

It is a hard backed book with a sewn in book mark and it is just beautiful. 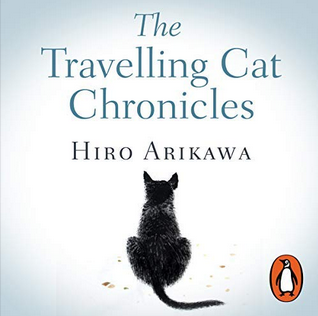 (I you want to read a sample first you can find this at Audible.)

I believe that it is also being made into a movie but for me the words on paper and my own imagination make this book one of those precious gems that only come along once in a while.  It is a gentle story with a redeeming ending but be warned you need a box of tissues at your elbow.  I am glad it is hard-backed  because I know it is one of those re-readable books that can be handed down.

Hope you have a very merry Xmas. 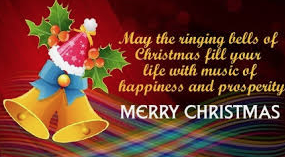 I always catches me unaware and this year and having been overseas so close to Xmas I find here it is, ready or not!

Yesterday was 'Gingerbread House' day.  Not terribly successful I have to say.  Firstly Monique dropper her ginger bread lady and knocked her head off, disaster. 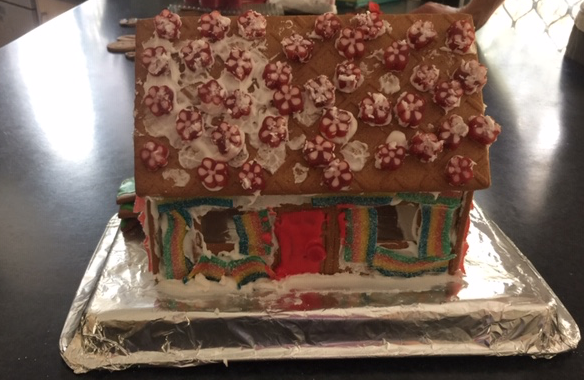 Then Oma dropped part of the roof which Monique thought very funny.  So this year the house only has half of the roof that we will fill with biscuits. The chimney also had to be eaten straight away as it couldn't be put on the roof. 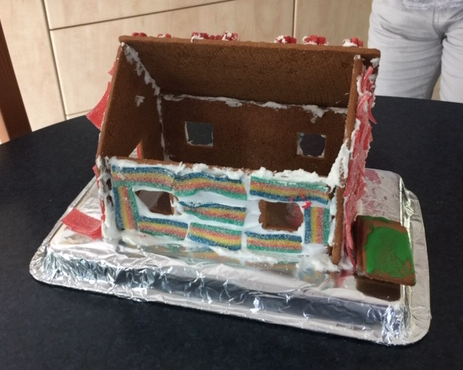 Getting ready to go out I dropped one ear ring.  I heard it fall but do you think I can find it?  it has to be there somewhere.   I had to find another pair of ear rings.  They are all in the box but trying to find a pair or the ones I would like was driving me mad.  I made a quick decision to make an ear ring holder for the hook type ones.  (The others can stay in the box.)

I used a cheap photo frame, removing the glass, covering the cardboard backing with gold paper and inserting a piece of hook rug mesh.  (The type you latchet the wool onto, a sort of large mesh. 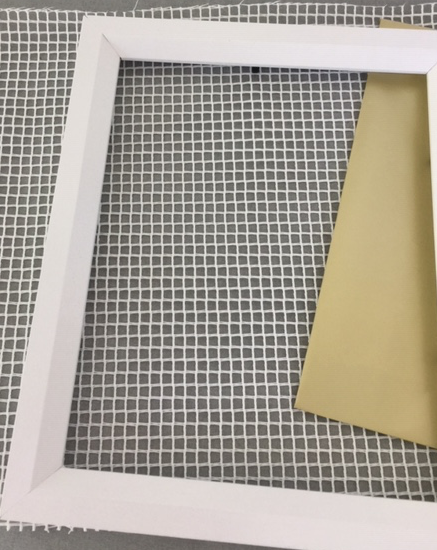 Then I dug out all those ear rings, put them into pairs and hung them on the mesh. 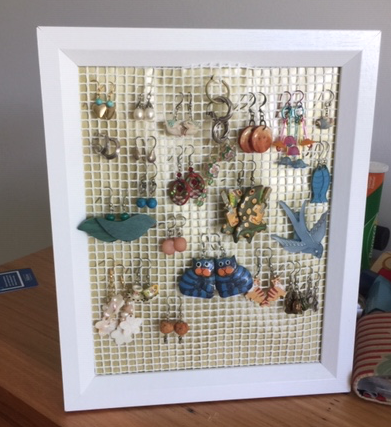 Heavens, I had no idea I had so many odd ear rings!

What is that up her shirt?

When I was a child I loved the chickens but not quite as much as this little one.

All I could see were some feathers. 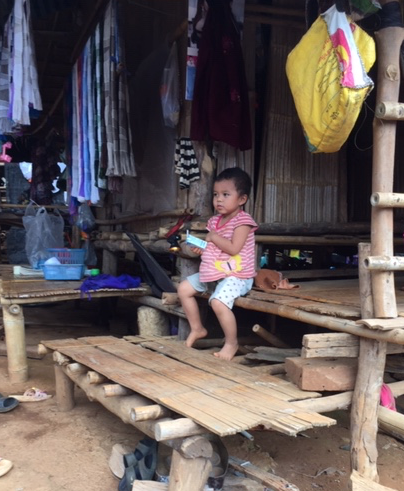 Then out came the chicken. 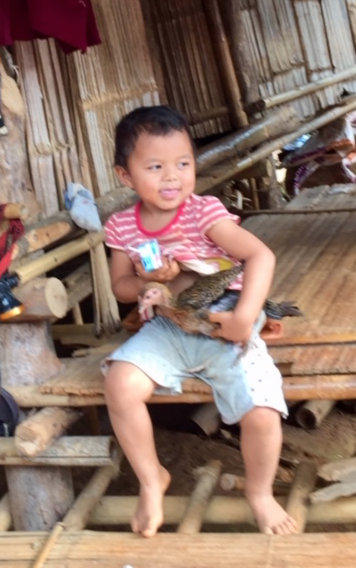 This was up with the hill tribes in the north of Thailand. 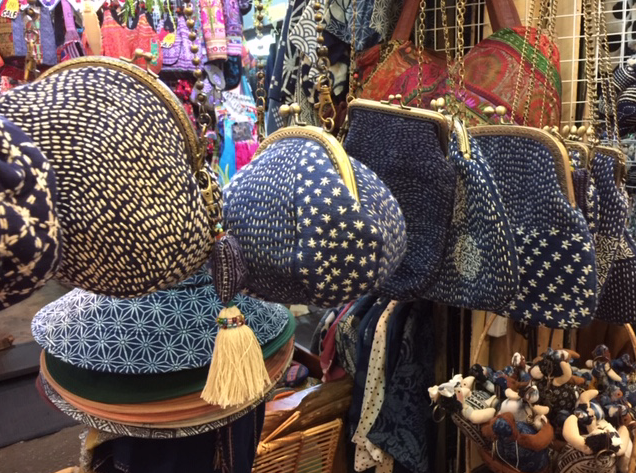 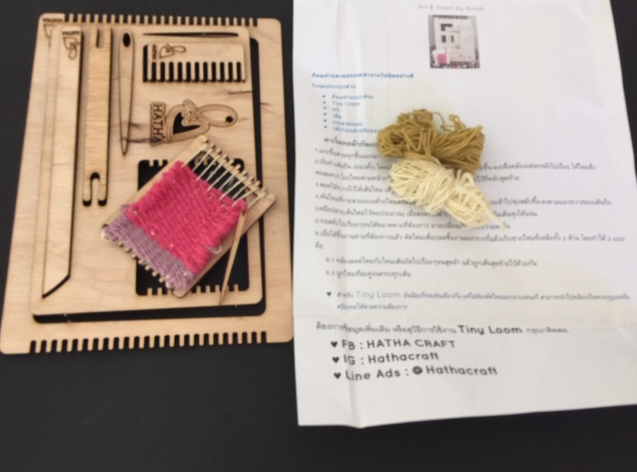 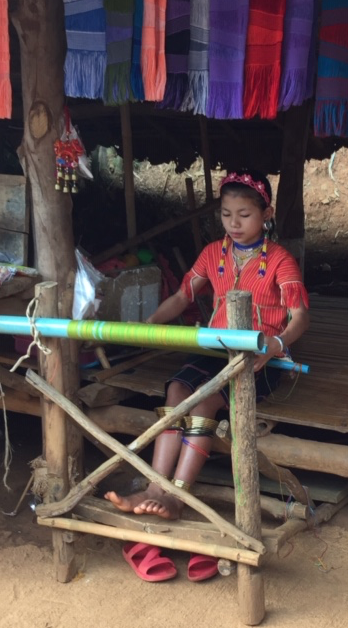 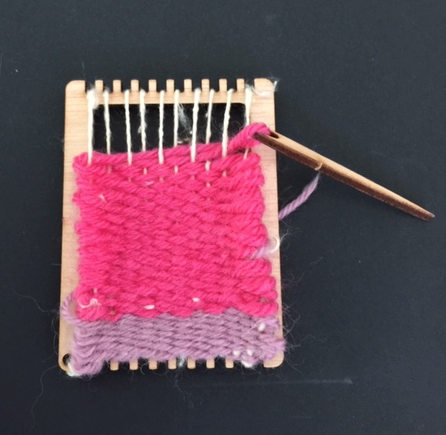 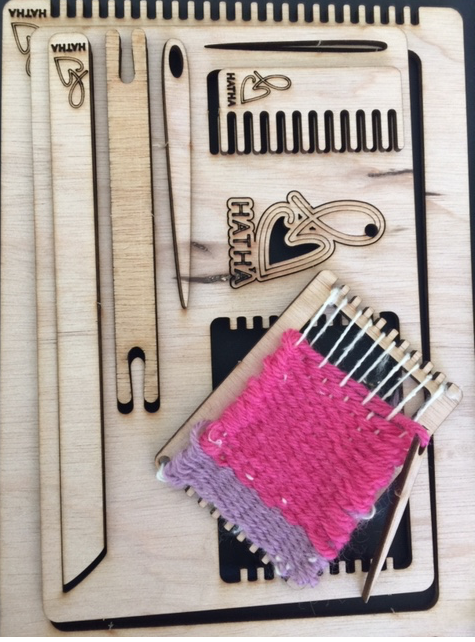 Some more emboirdery on straw hats and bags.

These hats were very colourful.  I'm not sure if I would wear them but they look good. 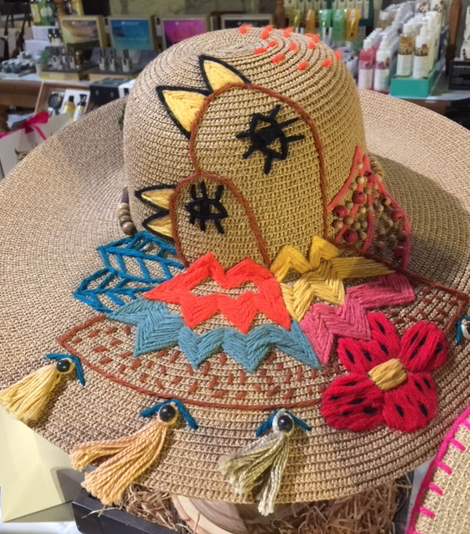 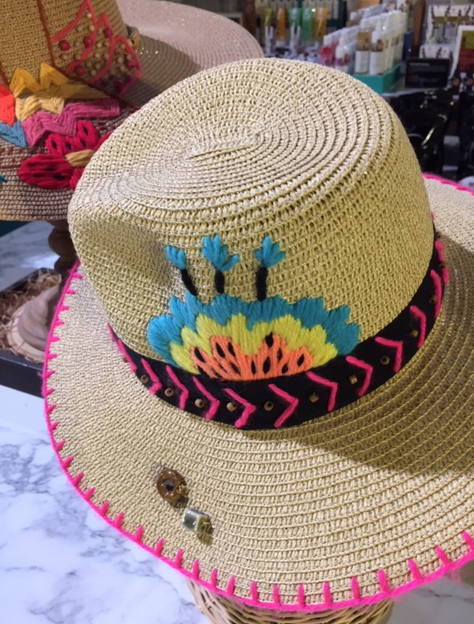 Then there was a lot of outline embroidery on goods, not only woven straw but on fabric bags as well. 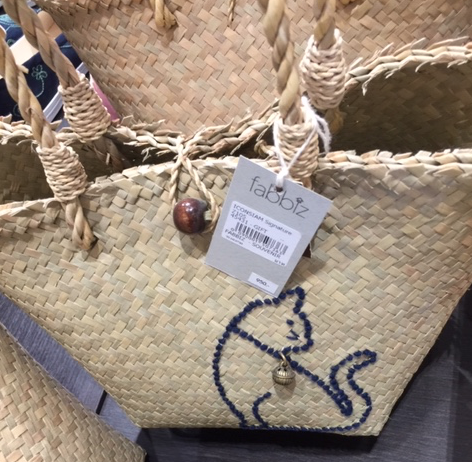 The roof of the ground flower was also decorated with woven lotus, 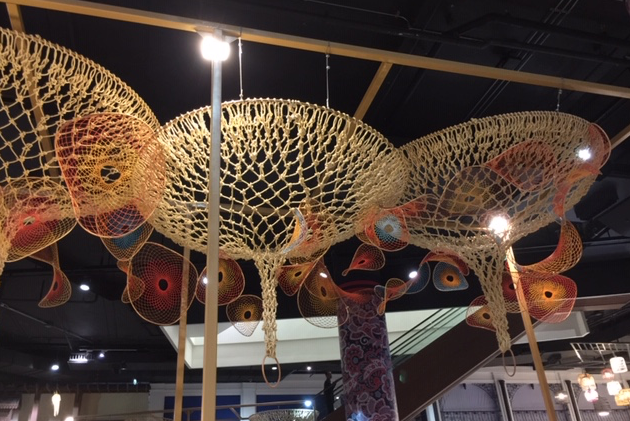 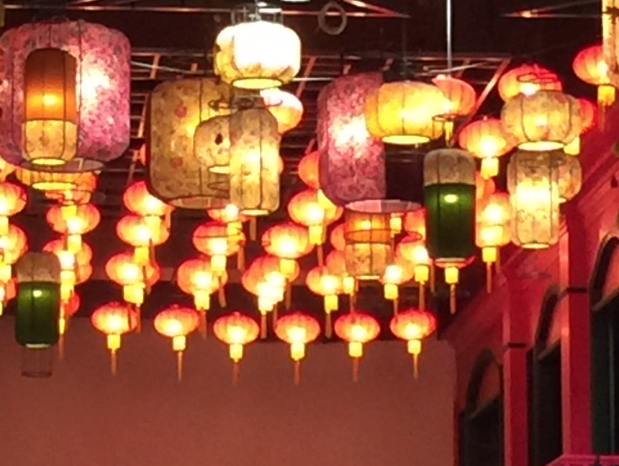 and other fanciful things. 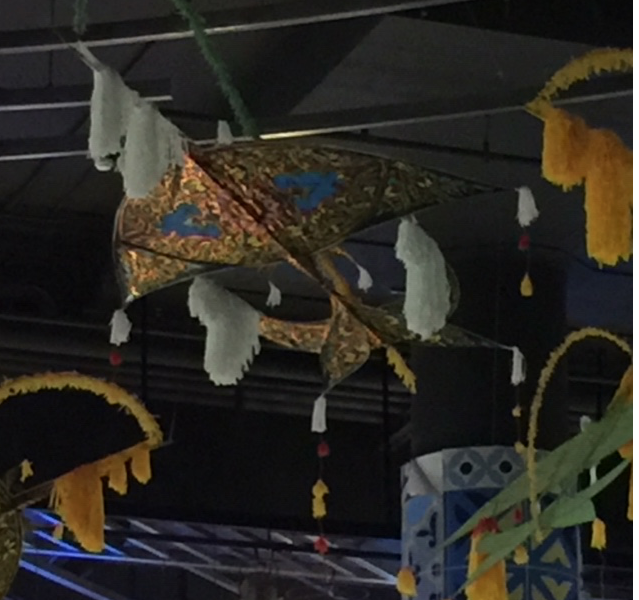 I can't say that I am fully recovered from all the viruses but my trip away has broken the terrible depression I was suffering.  I find on opening the computer up again that I will need to get onto Mr Apple to get my email working and lots of other small things.  It always amazes me that those 'small things' can take forever to fix.

So where do I start?  I think the shopping mall next to the hotel would be a great place.  I don't think I have ever seen a shopping mall that was so opulent yet still managed to retain a lot of the essence of Bangkok and Thai culture.  (if you are really interested there is a video on You Tube that runs for 25mins, all in Thai, that will show you what it is like.)

I found lots of interesting things in there.  On the ground floor was a floating food market, along with a traditional supermarket, that was very expensive. 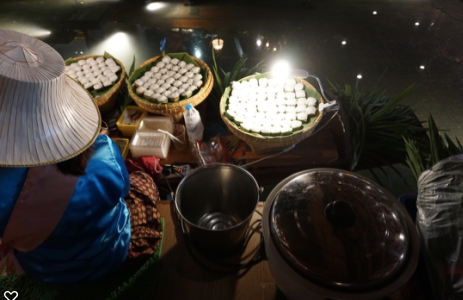 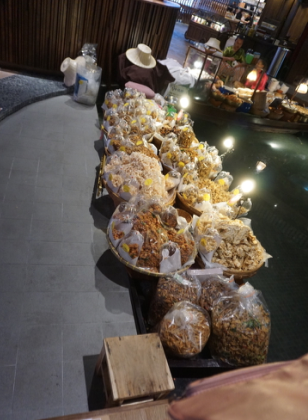 This is an interesting use of this type of embroidery.

It was the portraits that really caught my eye. 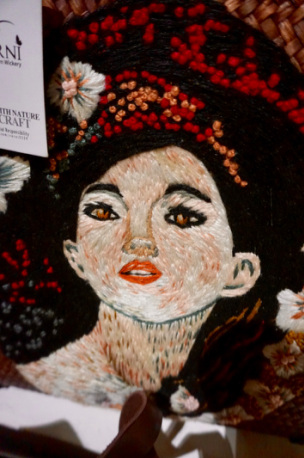 And on closer inspection it was definately all hand worked not machined. 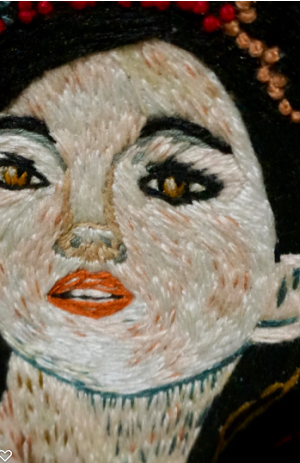 I hadn't expected to see something like this in Thailand.  But then there was lots of things I saw that I wasn't expecting.