It is strange going to sleep and waking up in another country.  The plane. rose out of Brisbane airport and the sky was dotted with clouds like you would see in a children’s painting.  Everything was bright and clear.  You could see the curve of the waves on the beach and the boats heading out fishing.  Then we turned left and headed out into the Pacific.  After a while the clouds bunched together until they formed a carpet.  It was as though I had passed into another reality.  Almost like losing touch with my life.  This is when I fell asleep.

When I woke I was looking down at the snow on the mountains and we were making our descent through the clouds into Dunedin.  But, those clouds weren’t giving up that easily.  They closed in again and rain ran across the windows.  Good thing planes has navigation because these clouds were hanging on like grim death and we didn’t break through until we were just above the runway.

Dunedin airport is only small with three customs officers.  We had lots of small babies on the flight who also slept all the way and were now ready for business.  I wasn’t quite sure how I was going to get into the city but found a shuttle bus at the front door.  The driver asked where I was staying and wrote this down.  I had expected to be dropped off at the depot in the city and then I would find my way to my accommodation.  But no.  All the passengers in the bus were dropped at their front door, for no extra cost.  I had a wonder tour all over the city as the driver dropped off his passengers one by one.

I am staying in a backpackers called Hogwartz.  It is in the old residence of the Catholic Archbishop at the top of a very steep hill.  It isn’t the Ritz but it is clean, I have a private room and bathroom and share the kitchen, lounge and dinning room with all the young travelers from all over the world.  A lot less stuffy than a hotel.  The kids all helped me carry my bag up the narrow steps, asked if I would like a cup of tea and then we started to swap war stories of our travels.

One thing I haven’t mentioned is the change in temperature.  It was 30 degrees C in Brisbane, 5 degrees C in Dunedin.  I thought I would freeze but I find that I am liking this chill in the air.


The door is locked at 7pm and then you have a code to open the door after this time.  I lost  mine within the first 10 minutes and I would have trouble seeing the numbers on the keypad anyway.  (I have to have my eyes tested again as soon as I get home.)   I made sure that when I went out to dinner that I got back before 7pm.  Oh that hill!  (pictures when I have better reception)

Dunedin is so like Scotland only it is at the other end of the world.  The mists are the same, the trees, the colours of Autumn, the people, which isn’t surprising as this is where most of the settlers came from.  In some ways it is similar to Edinburgh.  It is a University town with that same feeling.  It even has a statue of Robbie Burns! 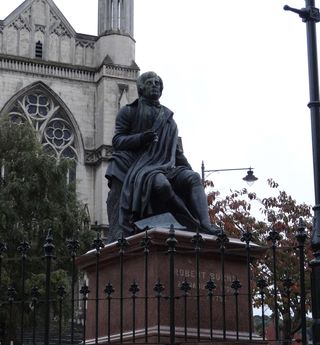 I tried to upload this entry last night but the internet is very slow and not cheap.  I went to bed fairly early but couldn’t work out how to shut the window so had this freezing little draft wafting over me all night.  Luckily the bedding is warm and I snuggled under the blankets.  I worked out how to shut it the next morning.

"Dunedin" is actually an old name for Edinburgh, apparently, and the early settlers were Scottish, and homesick...

Dunedin is a great place, and the locals are very friendly!

Is it really? Makes sense the weather is very similar.