I have gotten a little behind again with this stitching. 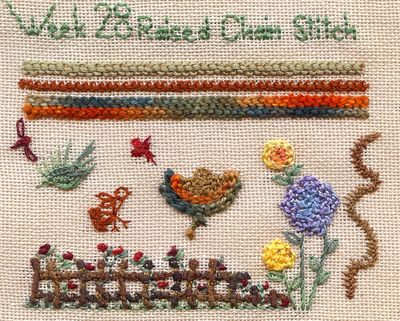 This was one of those relaxing stitches when worked in the band.  For those first three rows it kind of stitched itself.

For the next variation I worked a star shape and found that this worked well.  The worm thing was worked with 2 strands of stranded cotton with a tight tension.  It wasn't difficult to get the stitch to wave. 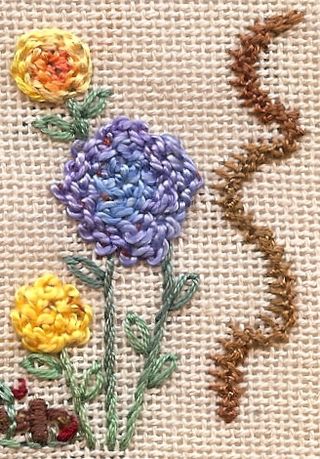 Next I tried some winged things with various levels of success. 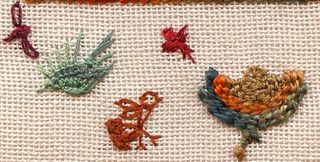 Lastly was the fence and vine.  I started with the fence, laying the base threads and then pulling it to the shape I wanted with the raised chain.  I then stitched this same stitch, but detached, to make the red flowers and  finished off the leaves with lazy daisy stitch.  This was far more successful than I thought it would be.

At this point all inspiration left me so I decided to just stitch different types of bands. 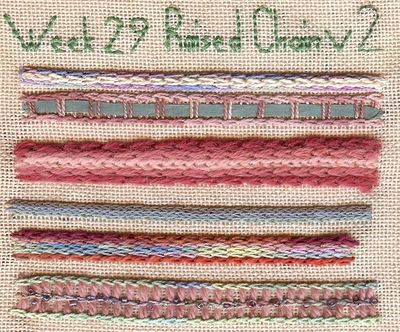 The first 5 bands were stitched on a base of 3 strands of stranded cotton.  This meant that the upper stitching stood proud.

Line 2 - used a silk thread placing the raised chain on either side and threading a ribbon through the exposed base threads.

Line 3 - worked in wool thread starting with a two count, then the next line was off-set and the centre line was worked over a one count. Then the first 2 lines repeated.

Line 5 - again silk threads, the variegation of the thread gives a nice effect.

Line 6 - Here I used a thick wool thread for the base and a thin silk thread tor the chain stitching.  To anchor the centre line I attached beads sewing them through the fabric.

That looks like fun! I love the flower-twisted fence!