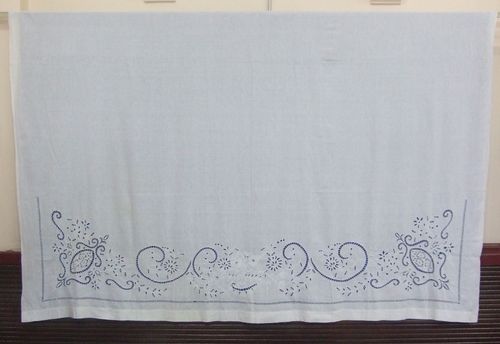 This is a bridal sheet place on the marriage bed and inspected by the brides family to show that she was virtuous.  It belongs to Maria.  Her mother Ekatrina was born on Rhodes in 1938.  Her father was a police officer from the north of Greece and was posted to Rhodes.  He was 17 years older than his new bride.  Part of the family had already migrated to Australia so the young couple decided to join them  They were not allowed to get on the boat unless they were engaged and on arrival there was a double wedding with Ekatrina's older brother.

This bridal sheet has come through the family over many generations.  The tradition of making the bridal bed with a special sheet was part of many cultures, but this sheet was kept and the stories of the women from this family preserved.

At one time I taught at a high school were there was a large proportion of children of Greek descent.  Most of the families came from the island of Rhodes and I am sure that many of the older members of the community would have known Ekatrina.  The students all had names for the different groups.  The students of European descent were the Wogs and the Australian students were called the Skippies (as in Kangaroo).  This wasn't said disparagingly, it was just who you were.  I went to a wedding this weekend between a Wogs and a Skippy.  We have far more in common that we have differences and  the many different cultures that make up our communities have enriched all of us.  Like Ekatrina's story.

(This weeks challenge was posted yesterday.)