I forgot to put up a post last night.  I had been researching the new National Curriculum and am now so thoroughly depressed and disillusioned that it will take some time to recover. On their site you can have your say, BUT, only if you register, so you can be traced, and only if you agree with what has already been decided.  The response is structured so that you can only respond to closed questions and there is nowhere where you can express an opinion.  These changes take education back to the same format it was in the 1950's and 1960's.  Time to go.  I love teaching but I believe these changes are going to stifle creativity and innovation and make school a very unpleasant place for 60% to 80% of our students, not to mention what it will do to our teachers.

Now to more pleasant thing.  Another piece from the Embroiderers Guild (Qld) exhibition.  These silk pajamas are imbued with love. 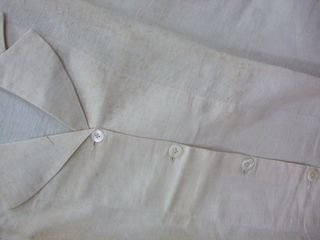 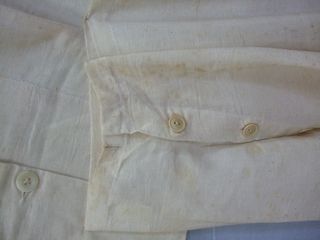 This is the story that accompanied thems.

Moroula was born and grew up in Yeroskipos, a village on Cyprus.  She also spent some time in Paphas.  When Maroula was 14, Harry, later her husband, tried to propose but her mother said she was too young.  Harry waited 2 years and they then were engaged.  Harry wanted to come to Australia to make some money before they were married so after their engagement he set out.  As Maroula was bethrothed at th the age of 16, she couldn't go out, so she did handwork and trained as a dress maker.  Her mother also did a lot of handiwork.

In 1951 she came to Australia and married Harry after receiving special permission because she was under age.  The pajamas were made for Harry.  Maroula's grandmother grew the silk cocoons in her mulberry trees and wove the material on her loom with cotton on the bottom and the silk thread on the top.  Maroula sewed the cloth and embroidered it.  All was worked on Cyprus.

I found your comments about the National C very interesting as I was teaching at a University and left last year because I was so tired of the battle for funding etc I loved teaching (was probably more of a teacher than researcher ) I just felt worn thin.

Yes Sharon when I realised what the actual content was and the legislation that goes behind it I was just so dismayed. But thinking about it this is the same thing that is happening in all western countries. I personally think it is a backward move but I am sure there are lots of teachers who believe that the Arts are a waste of time.

Gorgeous pyjamas! I loved them also. I went to the exhibition and spent some considerable time upstairs - no camera, sadly , but the needlework on the bedspreads, quilts etc was amazing. The count on the linen on which the drawn thread and needleweaving was amazing! The stories were interesting - i have could have got lost for hours.