Just because I wanted to 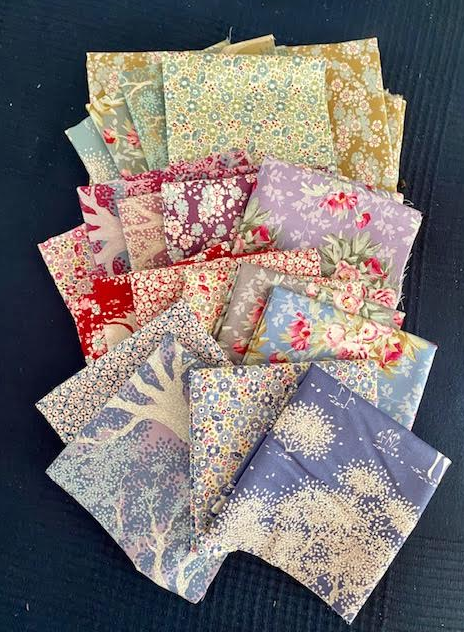 Or was it because of envy or even revenge?  My husband has come home twice this week saying he has bough new boats.  A new rowing skull, I don't know how he is going to get in and out of it.  It might just stay in the boat shed.  And then a new sailing boat that he can sail with the grandchildren.  Having always been careful where I spend maybe I am becoming a spendthift  in my old age?

This is the new Tilda range of fabrics called "Woodlands" which has just arrived in shops here.  The catalogue of this range can be viewed here. 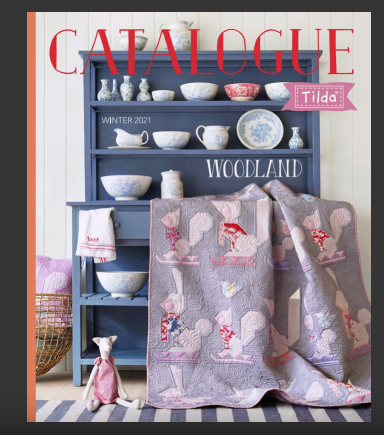 Oh dear.  I see they have yarn for making dolls hair.  I wonder who stocks that?

(They also have lots of free patterns you can download on their web site as well.)

That is how I would describe how I came to start this paper piecing project, on a whim.  It is actually a very relaxing way to sew, once you get over using the wrong interfacing, but even that isn't a problem.  I think this will make a nice quilt and will make a good donation quilt as well.  Instead of the one block a week I think two will be better and probably quicker to put it together. 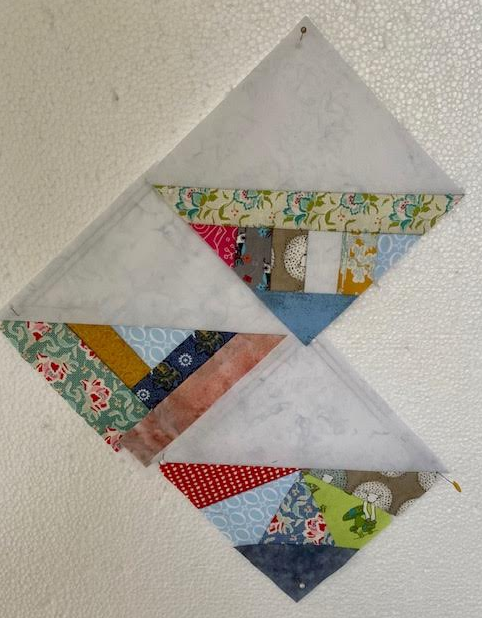 I want to ask my neighbour if she will give me of a copy of foundation pieced block of a lorikeet she designed to put into this quilt.  Margaret was one of the founders of foundation piecing publishing a number of books.  I remember back in my classroom days buying a CD of patterns that she had published.  All the students sewed a block and put it into a piece of work we were doing. 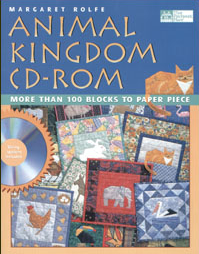 Another whim that has turned out well is my little dog, Bear.  He has become a firm part of the family and is a constant companion.  His fur still has a way to go but it is growing back after the RSPCA shaved him to get rid of a matted tangled coat. 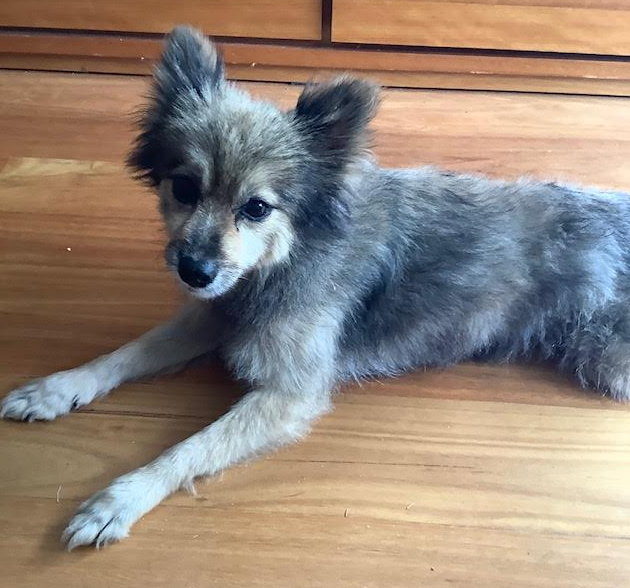 He had been keep in-doors I think for most of his life and had to be taught how to go outside to relieve himself when I first got him.  Now he runs off the lead on the beach everyday, has taken over ownership of the house and even insists on sleeping on my bed!

I was reading Kate Davies blog the other day and the role of Serendipity, which is a bit like a whim.  It has made me have a real re-think about the technology I use.  Setting up the computer for Monique's classes today saw me become very frustrated with Google and the roles that Twitter and Facebook play in our technological lives.  It would seem that we are being moulded by these Tech companies, mainly to sell us stuff.  I don't want to be force-fed by them and would much rather wander around the net and find my own information on a whim.

This week has been knitting.  I have finished the bodies of a couple of bears.

This is Henry.  He is knitted in Alpaca yarn and was the first.  That means that he was actually knitted 3 or 4 times until I got him right.  The face and especially the nose was problematic.  But, I'm quite pleased with him now. 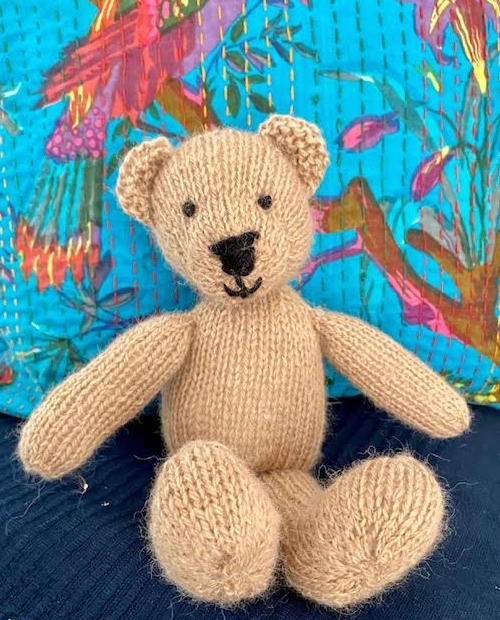 This is Olaf and he is a polar bear, at he moment he is being put together.  I used some left over sports weight wool for him and he was a dream to knit.  After all the problems that Henry presented this boy was very easy to live with. 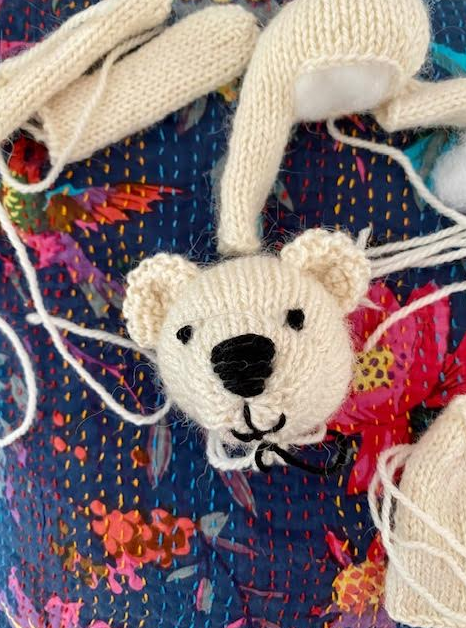 I hope I have enough yarn from Olaf left over to knit Gu Gu.   I have finished his head and doubled the black yarn to make his ears.  I hope he doesn't become a problem.  He is quite a 'chunky' fellow.  It's funny how there all have their own personalities as they come off the needles. 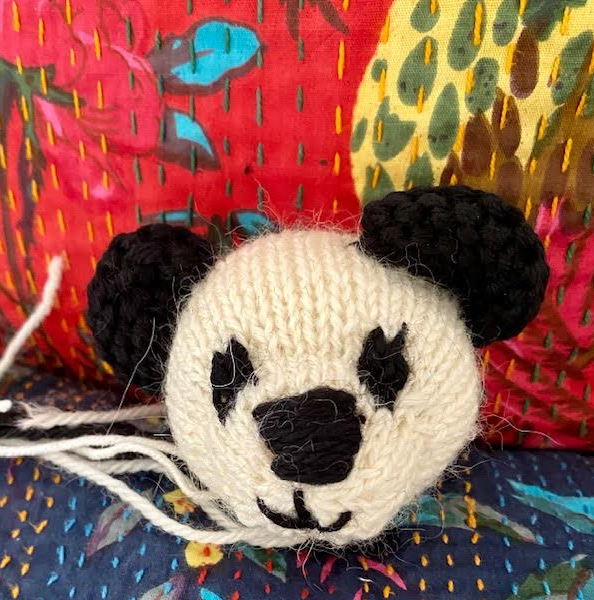 I still have to manipulate the stuffing  and sewing those noses to get each of them looking how I want.  As I am only using left over yarn they will never look as good as Julie's plus she must have knitted 100's of them and has really perfected their construction.  All this will come with time I hope.  (My friend said I had to add the size of these animals.  They are 9" tall.)

Next will be the clothes.  As this lot are all boy bears I think it should be shorts and sweaters.

I can still knit although I will have to put the embroidery away for a few days with this finger. (This story is a bit complicated.)

I normally have coffee with a friend on a Friday morning, which I did last Friday.  My daughter had said  "don't go and see Guy (my son) he is sick".  Alarm bells started to ring.  The only reason I wouldn't see him is if he had the virus.  Well, he didn't have the virus, we think, because he hasn't had a test, but he had been in a known hot spot so he locked himself in the townhouse for the 14 days just in case.

He must have been ill because when I rang he was out of food, didn't have a mask to go out, and actually said he was a bit hungry.  (Mum to the rescue.   He might be 40 y.o. but he is still my boy.)  I bought him a supply of food and pre-cooked meals from the Deli and dropped them around.  First question was "I don't suppose you brought any beer?"  Really!!!   His mind must not have been working because he had forgotten he could ring and have food delivered, and he is a Techie!!

So I had been up early to get the barge and had been driving around so I thought I may as well make the trip to Beenleigh,  which is half way between Brisbane and the Gold Coast.  Reason,  I had heard of a new Yarn shop that had opened up down there.  "Mean Mothers Creations".  Cute name.  Like lots of shops it is in an Industrial complex but there is parking out the front. 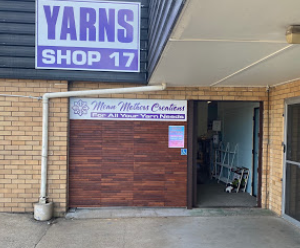 The last time I had been to Beenleigh,  (I had flown up from Sydney to go to a ball on the Gold Coast and was staying at a friends farm and I was still a teenager), there were still trams running in Brisbane, they had just started building a new highway and I had to catch a Greyhound bus that dropped me in front of the hotel.  All I could see were 2 hotels, a milk bar, a shop and a post office, and I knew there was a rum distillary somewhere.  When I got there this time it wasn't anything like that.  The traffic was horrible and there were one way streets and no numbers on the buildings.  But I did eventually find the shop. (Beenleigh has a colourful history and is worthwhile reading about.) 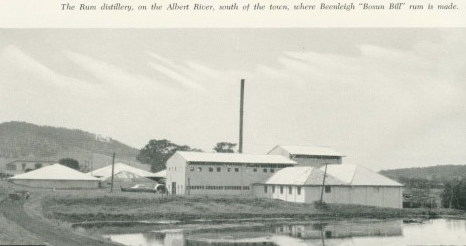 Mean Mother's has a great web-site, so I can order online, which will save driving.  The shop is very well stocked with yarn and notions. 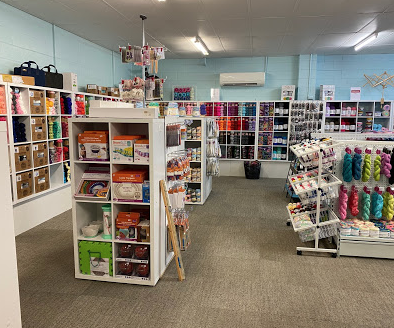 It is not a boutique type yarn shop with the very expensive yarns but they do stock quality brands and the price range is in that middle section of the market and they are super helpful. 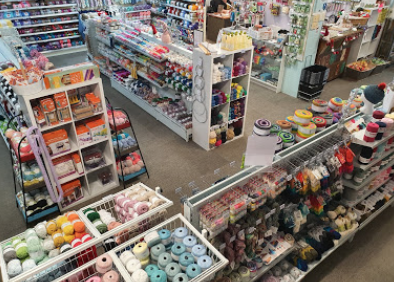 They have discounts for pensioners , which I have never seen before, and there were quite a few customers in the shop. 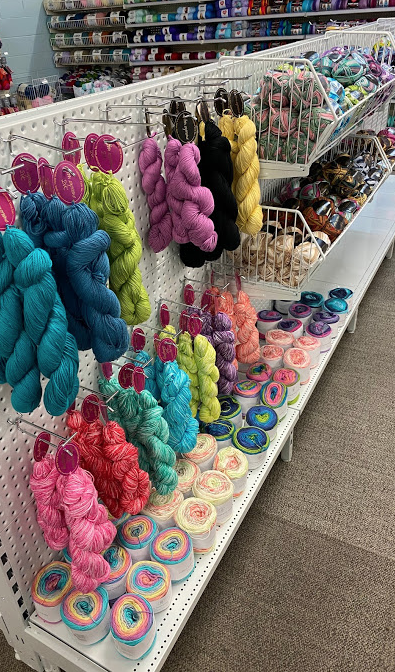 I just can't knit with cheap yarn or synthetics.  That rules out most of the stock from the Chain stores like Spotlight and Lincraft, and I will not pay $40 for a ball of wool no matter how beautiful it is.  So, this shop really fills a hole in the market.   I don't need any yarn at the moment but I got some needles and a counter so that I don't keep loosing what row I'm up to.  I think this will be my go to yarn shop now.

Keep your mind on the job!

I sat down to sew on the bindings to those couple of place-mats I made up the other day.  Firstly, I had to make the bias, so I cut up a whole piece of material and made heaps. 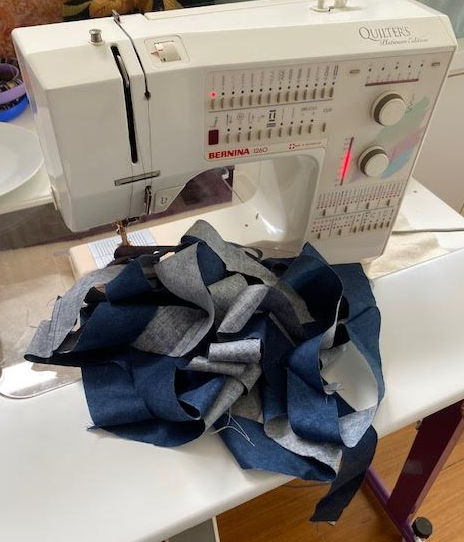 Next I was sewing the binding in place and multi-tasking at the same time.  Thinking about what I had to do next, like, " start dinner."  Anyway, I got to the last 1cm and realised I had to stretch the fabric a little.  At the same time I remembered why I had those place-mats in the 'to do' box.  These were going to be for practicing my quilting using rulers.   (Light bulb moment!)  I was also thinking, "why am I using this old machine".  Answer: " I'm afraid something might happen to my new one again."  (Oh dear) 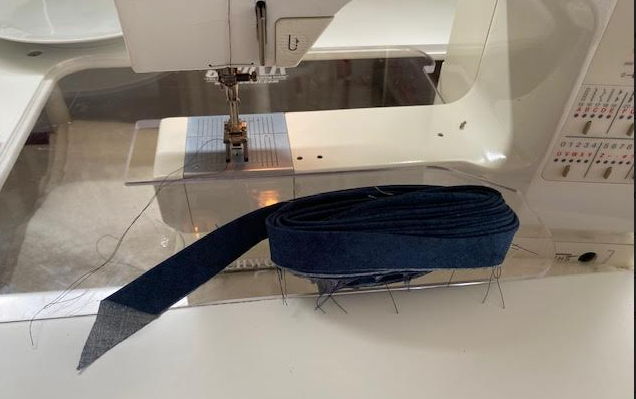 Not having my full attention on the machining I put the needle straight through my finger.   I haven't done that in a while!!!  It was a fine needle and it shattered in the finger.  I got the pliers straight away and pulled all the pieces out.  Blood all over the place.  That meant a trip to the Doctor so get an injection.  Now, it could have happened a few minutes later when I was going to change the needle to a 'jeans needle'.  One of those of a really thick variety, so I count myself lucky.

Moral, keep your mind on the job at hand.